The Agility Pyramid, also known as the Jaleustrophos Pyramid, meaning Tomb of the Agile in an old desert language,[1] is an Agility training area located in the Kharidian Desert, between Sophanem and Nardah, available to players with level 30 Agility.

On this course players start at the bottom of a pyramid with the goal of reaching the top, where they are able to collect the pyramid top. Before reaching the top, players will have to successfully traverse each of the five layers of the pyramid. These layers are filled with obstacles however, forcing the player back to the previous layer upon failing to pass them.

Pyramid tops may be handed in to Simon Templeton in exchange for 10,000 coins. The pyramid top will respawn when the player enters the doorway at the top of the pyramid.

Level 75 Agility or higher will prevent the player from failing any of the obstacles, making it possible to complete a maximum of 26 laps per hour, which will reward a maximum of 44,700 experience per hour.

The only requirement for this course is level 30 Agility. However, the fail rate for the obstacles is rather high at that level, sometimes making it feel almost impossible to reach the top.

Upon reaching the top of the pyramid, collect the pyramid top, which may be handed in to Simon Templeton in exchange for 10,000. A maximum of 26 pyramid tops can be collected per hour, resulting in 260,000.

Upon failure, the Agility Pyramid is capable of hitting a player for 10 damage, so Hardcore ironmen should be wary.

Players will suffer from desert heat while in this area. Make sure to take measures in order to survive in this area, e.g. taking plenty waterskins and food. 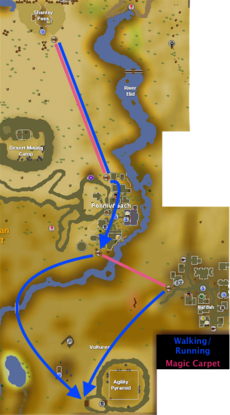 There are several different methods for travelling to the Agility Pyramid. The best options, ordered from fast to slow, are:

A maximum of 26 laps can be completed per hour, however this asks for high concentration. The maximum experience rates scale with the player's Agility level, capping at level 88:

Due to not knowing the exact fail rates of obstacles for other Agility levels, it is hard to predict the experience rates for players with lower Agility levels. Depending on luck with failures, sample rates can vary below.