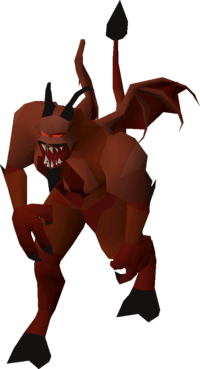 Agrith-Naar is a level 100 Greater demon who is the main antagonist of the Shadow of the Storm quest. He is summoned and then destroyed using Silverlight, which results in the blade transforming into Darklight as a result of absorbing his blood.

He reappears as Agrith-Na-Na during the final battle of the Recipe for Disaster quest.

Agrith-Naar uses melee up close and fire blast at a distance. He is able to detect protection prayers and will avoid using attacks the player is praying against. He is also capable of teleporting the player within melee distance of him should the latter attempt to run or attack from a distance.

He can only be defeated with the use of Silverlight. Only the last hit must be dealt using Silverlight; normal weapons and spells can be used to weaken him. However, using Silverlight for the entire fight is still a good choice due to its passive damage boost against demonic creatures. The player must remain in melee distance when finishing him off using Silverlight.

If the requirements to finish him off are met, poison damage will also kill Agrith-Naar as if the last hit had been made using Silverlight, making it easier for low combat level accounts and pures to defeat Agrith-Naar.