Akthanakos is a Zarosian Mahjarrat and a sworn enemy of Enakhra. Due to the player's actions in the Enakhra's Lament quest, he is freed from Enakhra's control and chases her to The North. The Ugthanki are named after him.

Like the other Mahjarrat, Akthanakos came to Gielinor long ago. He grew particularly fond of the camels in the area; he tamed them and trained them to fight using an amulet of his own creation to speak to them. His fondness of his camels, which were named Ugthanki after him, also led him to occasionally appear with a camel's head similar to the deities of the Menaphite Pantheon, who also appeared as humanoids with different animal heads.

An unknown amount of time later, unrest began appearing among some of the Mahjarrat, particularly Zamorak, who began to conspire against Zaros and eventually succeeded in overthrowing him. Enakhra supported Zamorak but Akthanakos was against the betrayal. 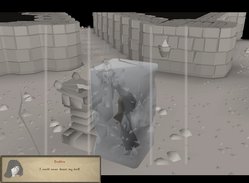 Some time after the betrayal of Zaros, Akthanakos was surprised when Enakhra contacted him, apparently repentant of her betrayal of the Empty Lord and wanting to switch sides. Meeting in a Kharidian Desert, Enakhra pretended to discuss this apparent change of heart, but Akthanakos soon discovered to his shock and horror that he had been deceived; Enakhra's supposed defection was but a ruse to lure her rival to the temple and entrap him there forever. To this end, Akthanakos was transformed into a lowly Boneguard to serve Enakhra, and would remain in this form for thousands of years, at the mercy of his great foe. 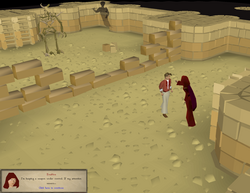 Thousands of years after being imprisoned, freedom came to Akthanakos in the year 169 of the Fifth Age in the form of an adventurer. Enakhra's temple, and the Mahjarrat herself, had long since disappeared beneath the sands of the desert, yet there were still those who knew of its existence, such as the Zamorakian mage Lazim, who sought Enakhra and the knowledge she would no doubt have. To this end, he posed as a humble sculptor, and manipulated the adventurer into helping him build a statue, due to now being unable to do so himself. Upon completion of the statue however, the dune upon which it stood caved in, revealing the tunnels of the temple below. Lazim's true intentions revealed, the adventurer was then hired to explore the temple thoroughly, and in doing so, received odd visions about the temple's history, including Enakhra's entrapment of Akthanakos. 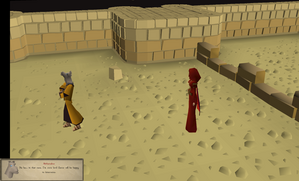 Eventually, after solving the temple's puzzles, the adventurer came across the final chamber, guarded by Akthanakos in his Boneguard form. After a brief encounter, Akthanakos beseeched the adventurer to free him from his incarceration by sealing Enakhra away behind the nearby wall. This allowed for Enakhra's hold over Akthanakos to break, and for the first time in millennia, assume his camel-headed form. Enakhra however would not be held, shattering the adventurer's hard work, but Akthanakos's request had been granted. The two rivals, now in a struggle again, transformed back into their skeletal forms and vowed to destroy one another, before both heading off to the North, where they would continue their fight.

They are currently locked in battle in the north whilst waiting for their ilk to gather.[1]