Al Kharid is a city in the north of the Kharidian Desert. It is the only desert city open to non-members, and players in the city do not suffer from the desert effect. Al Kharid is ruled by the Emir, although the vast majority of the work has been taken over by Chancellor Hassan since the Emir's son was kidnapped.

This city is particularly useful to powerminers because of the nearby Mining area, which contains tin, copper, iron, silver, gold, mithril, adamantite, and coal rocks. 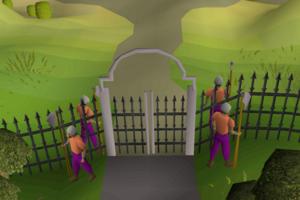 Al Kharid contains the closest bank to a range as well as two reasonably close fishing spots. It also houses a tanner, Ellis. In free-to-play RuneScape, Al Kharid's furnace is the second-closest to a bank, after Edgeville's furnace.

Al Kharid's bank is to the south-west of the city. The bank is populated largely by craftsmen, smiths and chefs, largely due to the proximity of the tanner, range and furnace. In the free worlds, it often has many players buying and selling cowhides. 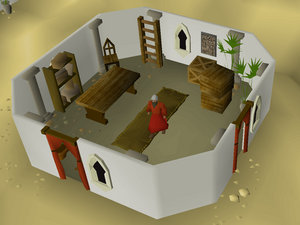 The scimitar shop is north-east of the bank.

You can also ask for a dragon scimitar. If you do this, Zeke makes several puns regarding the Monkey Madness I quest required to buy a dragon scimitar: "The banana-brained nitwits who make them would never sell any to me. Seriously, you'll be a monkey's uncle before you hold a Dragon Scimitar." 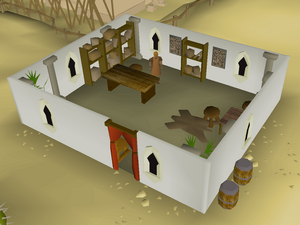 The Crafting store is north-east of the palace. 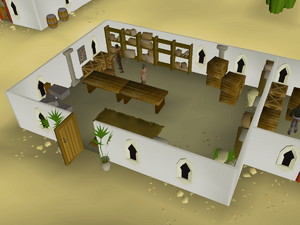 The general store is east of the palace. 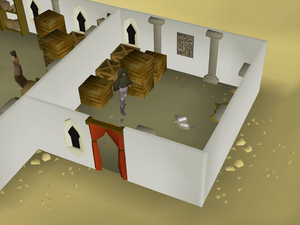 The plateleg store is south of the general store, east of the palace. 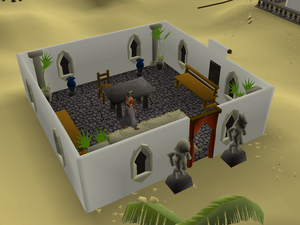 The plateskirt store is east of the palace.

This shop stocks identical merchandise to Louie's Armoured Legs Bazaar, except the armour is plateskirts, not platelegs.

The kebab shop is at the range directly north of the bank, a kebab can be bought for 1 coin here. Karim is the kebab seller. 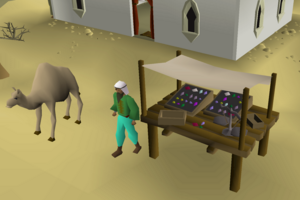 The Gem Trader is to the north of Al Kharid, east of the gate to Lumbridge.

The silk trader near the scimitar shop is a quick and easy way for newer members to gain small amounts of money. If the player is prepared to click through a lengthy dialogue, they can buy silk cheaply (3 coins) which can be sold for a profit at a general store other than the one in Al Kharid.

Note: If you refuse at the first time, he'll lower the price to 2 coins. 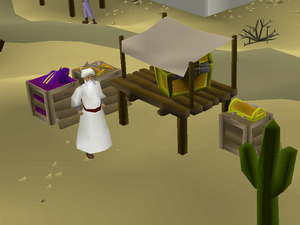 . He sells various items, and once The Feud is completed, he will open various other shops if you set up merchanting opportunities for him.

The Sorceress's Garden is found in the south-east of Al Kharid.

The Al Kharid mine is found near the northern entrance to Al Kharid.

The Emir's Arena is found north-east of Al Kharid.

Clan Wars was previously found east of Al Kharid, but has since moved to Ferox Enclave. In its place is Citharede Abbey. This includes a mine and 8 desert variant hillgiants.

The following Quests can be started in Al Kharid: