The Al Kharid Palace is the southernmost and largest building in the city of Al Kharid, and it is the residence of the Emir and the seat of government for the emirate of Al Kharid. Hassan, the Emir's chancellor, is present in the palace's throne room and features in the Prince Ali Rescue quest. Osman, the emirate's spymaster, is found wandering outside the palace. Members can use an amulet of glory to teleport inside the palace, on the ground floor[UK]1st floor[US] in the southern room.

The palace is primarily important in Prince Ali Rescue. There are several guards that spawn within the palace in the multicombat area, and they can be attacked or pickpocketed, but when one guard is attacked, the others will attempt to attack you as well.

Tour of the palace[edit | edit source]

The entire place is intended to display the wealth and power of the Emir. It is the largest and most impressive building in the city of Al Kharid itself, with expensive architectural details. The furniture and other furnishings throughout the palace are ornate and opulent. Many finely-carved statues made of a dark desert stone are situated throughout the palace and courtyard. The statues all depict the same man, but it is unknown if the person is the Emir or someone else.

As Al Kharid is in the northern Kharidian Desert, one conspicuous display of wealth is the lavish use of water, with an open fountain in the courtyard and many non-desert plants throughout the palace. 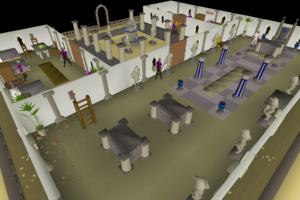 Osman is wandering around just outside of the palace, and along with Hassan, he also plays a part in Prince Ali Rescue. Additionally, members can begin the Sorceress's Garden minigame by speaking to him. An impenetrable hedge surrounds almost the entire the palace and is made of lush bushes found nowhere else in Al Kharid. A gap in the northern hedge serves as the single entrance to the palace grounds. There is no gate or other means to bar entry to the palace grounds. Nevertheless, the palace is defended, as many Al-Kharid warriors, in mulitcombat, can be found throughout the courtyard and the entire ground floor[UK]1st floor[US] of the palace. If one of the warriors is attacked, his comrades rush to his aid. This area is very popular for training melee and it is common to see hordes of low to mid-level players fighting the guards. The warriors can also be pickpocketed by players with sufficient Thieving skill.

The fountain in the courtyard can be used as a source of water, where vials, jugs, and buckets can be filled for free. This is a more convenient source than the city's well, which requires a bucket for use.

The east and west wings of the palace border the courtyard. These serve as the barracks for the warriors, with well-made divans and other furniture present for their use. Each wing has one or two ornate chests that can be opened and searched, but no items are ever found in them. The east wing has a cabbage spawn, while the west wing has a jug of water spawn.

The throne room makes up the entire southern part of the palace and is where Hassan can be found. A ladder here leads to the 1st floor[UK]2nd floor[US]. 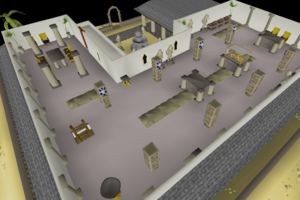 The interior of the 1st floor[UK]2nd floor[US] consists of a single, large L-shaped room with many fine furnishings. Three ornate chests are in the eastern part of the room, one of which is the solution to a Treasure Trails clue.