From Old School RuneScape Wiki
(Redirected from Alchemist's Playground)
Jump to: navigation, search
The RuneScape Wiki also has an article on: rsw:Mage Training Arena
This article is about the minigame north of the Duel Arena. For the minigame in the Wilderness, see Mage Arena.

The Mage Training Arena is a members'-only Magic minigame located to the north of the Duel Arena. Using various spells, players earn pizazz points in different minigames which they can use to buy items in a shop on the top floor of the arena. This is not to be confused with the Mage Arena, which is a dangerous Wilderness minigame.

After the discovery of runes by humans, many accidents occurred as inexperienced mages attempted difficult spells. The wizards of the original Wizards' Tower created the arena and the various guardians so that mages could train with the more mundane spells. Unfortunately, it was destroyed by warriors and rangers that were angered by the new art of Magic. Recently, the current denizens of the Wizards' Tower have recreated the Arena and Guardians and have also developed charmed warriors to defend the arena against further attacks.

Players need a minimum of level 7 Magic to participate in this minigame, although that will allow the use of only a single spell. At level 33 Magic (required for Telekinetic Grab), a player can participate in all 4 activities. Level 93 (enchant zenyte) will allow players to use all spells in all areas of the minigame. The higher the level of Magic, the more experience points the player will receive.

Players also need to either wear or have in their inventory a Progress hat, which can be obtained from the Entrance Guardian. Talk to the cranky Progress hat to learn pizazz point totals for each room. 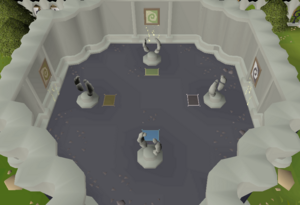 The Mage Training Arena offers four rooms for the player to practice casting Alchemy, Enchantment, and Telekinetic spells. In addition to pizazz points, the player earns coins and runes in the activities. Players must acquire the appropriate number of pizazz points in each of the four rooms to buy items from the Rewards Guardian.

The teleports to the four rooms are located in the north area of the arena:

In this room, players must use High Level Alchemy or Low Level Alchemy to convert items to coins. The items can be found inside one of the 8 cupboards in the room. The amount of coins and the locations of the items changes every 42.2 seconds

In this room, players must use enchanting spells to enchant various shapes located in the 4 corners of the room, granting pizazz points and transforming the shapes into orbs. These orbs are then deposited in the chute in the middle of the room to earn extra rewards, with every 20 orbs deposited granting a reward of 3 blood, death, or cosmic runes.

In this room, players must collect and convert bones into fruit using Bones to Bananas or unlockable Bones to Peaches spells. There are 4 different types of bones that can be collected from the bone piles. Each bone pile will cycle through each type of bone in order from 1 to 4, giving 4 of each type of bone before advancing to the next type. Each bone will convert to different quantity of fruit depending on the tier. The fruits must then be deposited in the slots along the walls of the room to gain pizazz points.

On the bottom right there is numbers 1 to 4, those numbers tells you how many fruits you get for converting. You only have about 25 inventory sort max.

Strategy is to take 4 of each type of bones. This will be your cycle to be efficient.

Cycle step 2 and 3 together, converting and depositing your inventory after each.

Players will earn 1 Graveyard Pizazz point and a bonus of one or two water, earth, nature, death, or blood runes for every 16 fruits deposited.

Dying in this room results in the loss of 10 Graveyard Pizazz points. 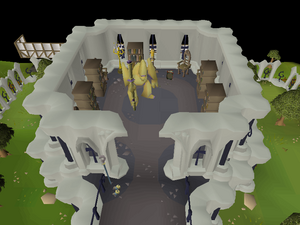 A player in the upper level of the Arena, containing the rewards shop.

A player can buy runes, infinity robes, wands, the mage's book, and the Bones to Peaches spell in the shop upstairs with the pizazz points they've earned. If a player is having trouble with the arena, an arena book may also be bought for 200 coins.

Note that the prices listed for the wands (apprentice wand, teacher wand, and master wand) are all upgrades, meaning the player must both spend the points and exchange the wand one tier below it (e.g. to purchase a master wand, the player must turn in a teacher wand in addition to spending the pizazz points). This effectively gives the master wand the price of 480 Telekinetic, 530 Alchemist, 4800 Enchantment, and 480 Graveyard pizazz points.

To obtain enough points to purchase everything in the rewards shop at least once you can expect to burn an estimated 4682 Law runes (including rewarded runes), 13000 Nature runes, and between 2000-6000 Cosmic runes depending on the level of enchantment spell used. These estimates assume the following:

There is a maximum number of points a player can have in each activity:

If the maximum for an activity is reached, players will be allowed to enter that chamber, but will receive a warning before doing so.