From Old School RuneScape Wiki
Jump to navigation Jump to search
The RuneScape Wiki also has an article on: rsw:Amascut
Amascut? (edit)

Amascut (Jagex pronunciation: AH-mass-cut), also known as "The Devourer", is the demi-goddess of destruction, formerly the goddess of rebirth, and one of the four major gods of the Menaphite Pantheon. Amascut is the creation of Elidinis and Tumeken and sister of Icthlarin. She appears in the Icthlarin's Little Helper quest, disguised as a wanderer near a tent north of Sophanem. She is extremely fearful of cats, shown by her reaction to the player's cat. After the quest is completed, she disappears and can no longer be found at her tent.

Amascut was presumably created in the early Second Age by the gods Tumeken and Elidinis, who arrived on Gielinor after Guthix went to sleep and new gods began to set foot on the world. Together with the other gods of the Menaphite Pantheon, Amascut helped establish and rule the Kharidian empire, one of the most prosperous areas on Gielinor at the time.

During the Second Age, the peace of the Kharidian land became threatened, when the god Zaros sought to expand his already vast empire into Menaphite territory, beginning a long and bloody conflict known as the Kharidian-Zarosian War or "Great War" by the Menaphites. Amascut and the rest of the Pantheon fought to defend the empire, but even combined they struggled to resist the might of the Empty Lord, and slowly but surely more ground was lost to the invaders.[1]

Eventually, as the situation began to become particularly dire, Icthlarin realised that they alone could not turn the tide of battle, and resolved to find allies who could. Leaving Gielinor, Icthlarin and Amascut eventually came upon the war-torn world of Freneskae, home of the powerful and near-immortal race known as the Mahjarrat. Here, Icthlarin was able to convince a number of them to join him and help bring an end to the Zarosian incursion.[2]

Ultimately, the Kharidian army and its Mahjarrat allies, under the leadership of Icthlarin were able to successfully expel the Zarosians from the land. Peace, albeit a temporary one, had returned to the land. The peace, however, did not last as the Mahjarrat grew restless and eventually betrayed the Menaphite Pantheon and joined Zaros.[4]

After the events of the Kharidian-Zarosian war Amascut began to change: supposedly the disturbing display of the Mahjarrat pushed her towards madness and she began devouring the souls that she was supposed to guide to rebirth. Amascut declared herself The Devourer, intent on feasting upon the souls of the deceased[5] and reaping destruction upon the land, in direct opposition to her brother and the rest of the Pantheon, whom she now held with great contempt. Icthlarin and Amascut have been locked in a rivalry ever since.

Sometime after her metamorphosis, Amascut began to destroy her own temples and clergy. In response, her followers, including Neite - then one of Amascut's chief priestesses - rose up against her, cursing her that her name would be forgotten, any body she held would cast her out before long, and never again could she assemble willing disciples. Amascut, however, retaliated with a curse of her own, binding her priests in her own form, dooming them to walk the world as cats, which she in turn grew deathly afraid of.

Icthlarin, seeking to protect Neite and the others from his sister's wrath, brought them under his wing, gifting them with immortality that they may never die from natural causes.[6] Around the same time, Icthlarin also appointed the Sphinx as the guardian of feline kind, safeguarding them against the agents of the Devourer in return for eternal life[7].

Amascut's insanity would cause great problems for Icthlarin, as in addition to causing troubles on the surface, she had created beasts to prowl the underworld, eager for souls to devour. This meant that escorting and guarding souls through the underworld took up more of Icthlarin's time, and meant that he would not always be successful, with many souls being devoured by Amascut's beasts. Icthlarin's role now consumes so much of his time that he has little time to devote to what happens on the surface, only interfering when he absolutely must.

Amascut and Akkha conspiring against Het. One of Amascut's many ploys on her pursuit of divinity.

For reasons unknown, there are little records of Amascut's participation in the God Wars despite major battles being fought in the Kharidian region, which had become a desert as a result. Uzer and Ullek fell to the demons Thammaron and Balfrug respectively, while other settlements such as Sophanem, Menaphos, and Nardah survived. Exactly why she missed such an opportunity to cause destruction is not known, but she laid low during the Wars, only emerging after they were settled with the Edicts of Guthix. 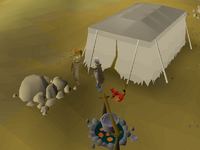 The adventurer's first encounter with Amascut, disguised as a humble wanderer.

In the year 169 of the Fifth Age, Amascut sought to obtain the soul of Klenter, a former High Priest of Icthlarin. To this end, Amascut - disguised as The Wanderer, hypnotised a passing adventurer into infiltrating his tomb and stealing one of the canopic jars. This act of depravity, however, did not go unnoticed by the god of the dead, prompting Icthlarin himself to appear before his sister's latest tool and relinquish the Devourer's hold over them, denying Amascut Klenter's soul. After her attempt was foiled she disappears.

Excavation of the Necropolis[edit | edit source]

After the events of Contact!, the Kharidian Spy Maisa contacts the adventurer regarding some suspicious activity in the Necropolis ruins on the peninsula south of Sophanem. Maisa's initial report follows the mysterious disappearance of an alarming number of Menaphite citizens which lead to a breach of the quarantine on the city of Menaphos. After the Adventurer's initial investigation it is revealed that the missing Menaphites have been conscripted to excavate the Jaltevas Pyramid within the Necropolis through means of Amascut's hypnotic influence. Further investigations in Ullek by the adventurer revealed that Amascut holds the Pharaoh of Menaphos and the remnants of the Sect of Scabaras within her influence. In the Ruins of Ullek, the spirit of Mehhar, son of Osmumten, informed the Adventurer of an incantation that breaks Amascut's hypnotic trance in most cases except for the Menaphite Akh. With this information, the Adventurer frees the High Priest of Scabaras from Amascut's control who then informs the Adventurer of her plan.

Amascut's scheme revolves around the quarantining of Menaphos by using the Scarabites as her agents while she uses her influence over Pharaoh Kemesis for unknown reasons, as well as searching for a pair of legendary weapons. In fact, these weapons were the Wardens - ancient, massive automatons built by Tumeken himself:[8] one imbued with his divine essence, and the other with that of his wife Elidinis.[9] When the Kharidian–Zarosian War ended with Tumeken's sacrifice, Pharaoh Osmumten was tasked by Elidinis to hide the weapons the gods had used and given them in order to prevent them from falling into the wrong hands. Some of these weapons would be buried with him in the Jaltevas Pyramid, including the Wardens.[10]

Amascut sought the Wardens in order to use them as the catalyst for her ascension to godhood, as they have the ability to drain and transfer divine energy between beings.[11][12]

Amascut would spend many centuries capturing and imprisoning the lesser deities of the Menaphite Pantheon through various deceptive means[13].

The first god she captured was Scabaras, having done so after learning of a dawn scarab named Kephri who longed children. She promised her children wiser than her, which she did through a loophole by corrupting her to become much more savage than them. As her consciousness faded away, she called for Scabaras, who answered her call and was quickly captured by her. She learned of a baboon tribe led by Ba-Ba who longed to keep her family intact, as she saw her scion as a lazy and arrogant ruler who would bring ruin to the tribe she once led. She promised Ba-Ba immortality, which the matriarch accepted; upon doing so, she killed the entire tribe and revived them as undead thralls, who she used to capture Apmeken. When Akkha joined a cult known as the Children of Rebirth, dedicated to Amascut's original form, they committed ritual suicide, although Akkha's poison failed to kill him and now warped, she answered their calls and found him at the verge of death. She sealed him in a sarcophagus, trapping him in a tormented state of life and death and used him to lure Het in; the warrior, angered at his former god's apparent abandonment, overwhelmed him, allowing her to capture him. She also learned of a crocodile named Zebak who had abandoned his god's values and sought to continue eating, willingly working with her to capture Crondis. After capturing her, Amascut dishonored their agreement, cursing him in a perpetual state of torment by making everything he ate turn to dust and making him unable to die through starvation. With all the Menaphite Phantheon captured, she brought them to Osmumten's pyramid to begin her plans.[14]

The adventurer and Maisa, aware of Amascut's plans through the spirit of Osmumten's son Mehhar, and the High Priest of Scabaras, quickly move to the tomb to free the lesser deities. Inside the tomb, the adventurer successfully freed them from Amascut's control after defeating their guardians. Though weakened and unable to directly confront Amascut, they were able to help open the entryway to the lower level of the tomb where the Wardens are found.[15][16]