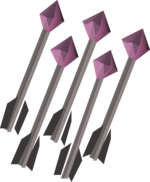 With a Ranged Strength bonus of +115, they are the equivalent of runite bolts in combat. Amethyst broad bolts are a superior alternative to their regular and arrow equivalents for the purpose of slaying Turoth and Kurasks using ranged.

Players with 76 Fletching and who have unlocked the "Broader fletching" ability for 300 Slayer reward points can create these by adding amethyst bolt tips to broad bolts. Amethyst broad bolts are fletched 10 at a time and give 10.6 Fletching experience per bolt, or 106 experience per set of 10 bolts made.