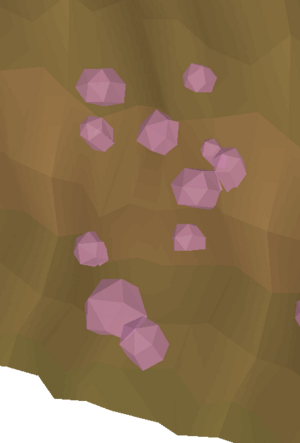 Amethyst crystals are the highest level rock in Old School RuneScape, requiring 92 Mining to mine. They are located exclusively in the Mining Guild with two areas to mine them from; the area directly west of the bank chest requires completion of the Falador Diary (and having spoken to Belona for permission access), while the area further south-east has no additional requirements to mine.

When successfully mined by a player, they receive an amethyst, which yields 240 Mining experience. After being mined, amethyst usually takes around 75 seconds to respawn.

A gem table rolls before the main drop table.[1] There's a chance to receive nothing here so that players can receive no items from a rock even if they are guaranteed to receive an ore in the main drop table.[2] The table gets more likely to be rolled if the player has a charged amulet of glory equipped: the probability grows from 1/256 to 1/86.[3]

The probability for a player to receive some amethyst drop depends on the player's mining level. The rock will deplete after receiving the amethyst, unless affected by the effect of expert mining gloves.

The following table shows items that can be received in addition to the main resource.