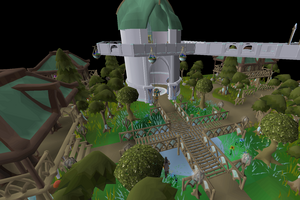 The Amlodd Clan is one of the eight elven clans who were originally brought to Gielinor from Tarddiad by Guthix and Seren in the early First Age. They are a clan of mystics, shamans and mages. They are located north-west of the Tower of Voices in Prifddinas, off the western path.

The Gauntlet was created by the Amlodd Clan to help train Prifddinas' finest warriors and survivalists.