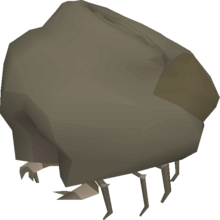 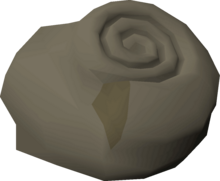 Ammonite Crabs can be found on the most coastal areas and the most northern beaches of Fossil Island. They cannot be attacked by dwarf multicannons. They are popular among players for training.

Ammonite crabs are one of the creatures that are recommended as training monsters for members. They are used by members to train combat as they have high hit points and they have low defence and attack, meaning that the player takes little to no damage and can afk train on them. This involves running to a location where 2 or more crabs are spawned which ensures you will never leave combat.

Ammonite crabs will become unaggressive after 10 minutes of combat. The player will have to reset the timer by walking out of the area a small distance.

Drop rates estimated based on 1,170,000 kills from the Drop Rate Project, unless otherwise cited.