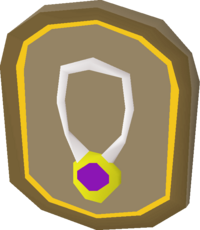 A mounted amulet of glory can be built in the Guild trophy space of the Quest Hall in a player-owned house. It requires 47 Construction to build and when built, it gives 290 experience. The player must have a hammer and a saw in their inventory to build it.

Players can rub the mounted amulet to teleport to Edgeville, Karamja (Musa Point Banana plantation), Draynor Village, and Al Kharid (inside the palace). These are the same destinations as the teleports for an Amulet of glory, but the mounted Amulet of glory has unlimited teleport charges.