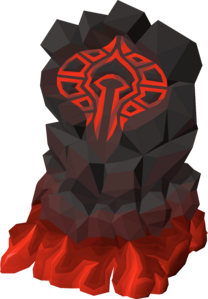 The Ancestral Glyph is an object found in the Inferno. For most of the waves, it is dormant on the northern wall, imprisoning TzKal-Zuk. On the final wave, he breaks free and the glyph starts floating on the lava between him and the arena the player is on, moving on the east-west axis from one end to the other repeatedly.

Players must utilise the glyph as a shield against TzKal-Zuk's attacks to prevent taking potentially fatal damage. It can sustain TzKal-Zuk's attacks indefinitely, although it has limited hitpoints against other monsters that spawn periodically during the fight and start attacking the shield, making it imperative for players to attack them to gain their aggression; if the shield takes too much damage, it will fall and leave the player without protection against TzKal-Zuk.