The Ancient Cavern is an area reached from the whirlpool near Otto Godblessed's house. Players must dive into the whirlpool to enter the cavern, which contains many high-level monsters, including a high level metal dragon, the mithril dragon.

The cavern can only be accessed after the player has completed the first part of Barbarian Firemaking, requiring level 35 Firemaking. After that, the player must ask Otto about making pyre ships, and then will be granted access to the dungeon in order to fulfil the objectives required to make them. If a player dives into the whirlpool before completing these tasks, they will be swept away, losing a small amount of their hitpoints, eventually washing up on the shore near Hadley's house.

Players cannot leave the cavern via the whirlpool. Instead, they may leave by riding on one of two aged logs that can be found near the waterfiends, or by teleporting out.

The Ancient Cavern is "far too damp" to use a Dwarf multicannon. 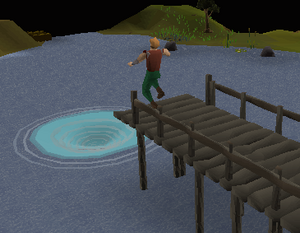 Jumping the whirlpool in order to enter the cavern.

The Ancient Cavern is one of the most dangerous dungeons in RuneScape. All who enter the area should be prepared to face dragons with long-range attacks, and high-level monsters that can attack using more than one combat style.

To access the dungeon the player must have learned about funeral pyre burning, in Barbarian Training from Otto Godblessed. To enter the dungeon, the player must jump into the whirlpool off the platform on the northern shore of the Baxtorian Falls lake. Players cannot jump into the whirlpool with a pet following them. Upon entering the cavern, the player appears on a small platform with stairs to the lower level and can see a mithril dragon off in the distance in another part of the upper level. 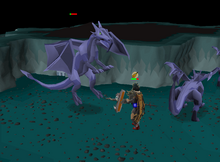 A player fighting mithril dragons on the upper level. 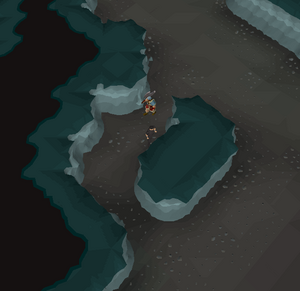 A safespot within the cavern. There is a Confused barbarian here, but he is not aggressive.

There is a safe area south of the entrance of the lower level in the middle of the room; it is a large rock with a short passageway on the south-east corner. Keep in mind that not all tiles around the rock are safe, and it may still be possible to be hit by a brutal green dragon's dragonfire here.

Remember, the caves are very dangerous so it is recommended to pack good combat gear, an anti-dragonfire shield, anti fire-breath potions, super sets, teleport runes and high-healing food. A ring of life may or may not help because of the high hits the monsters may deliver.

If players need to escape the dungeon and have no teleport, the only way out is by canoeing on the aged logs floating in the water. This will lead them down an underground river out of the caves that takes them downstream. Home teleports are also a viable option.

A total of 12 mithril rocks can be found on the upper level. None are safe to mine, as mithril dragons roam throughout the upper level. One skeleton warlord is also present on this level, in the south-east area.

The whirlpool entrance to the Ancient Cavern is south of the Barbarian Outpost near Baxtorian Falls. Players can get there by walking west from Seers' Village, north from East Ardougne, or east from the Tree Gnome Stronghold. (From the stronghold, players with level 37 Agility can take the shortcut north-east of the Grand Tree; otherwise, the more round-about route through the stronghold's southern gate is necessary.)

Some teleports can be used to get near the whirlpool: 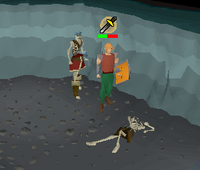 A pile of old barbarian bones that can be rummaged.

There are three skeletons on the ground throughout the cave that can be rummaged for items. One is near the waterfiends and the other too are to the North next to many dragons.

Rummaging a skeleton will deal 0‐22 damage and will respawn after 2 minutes, which also causes and skeleton spawn from them to despawn.

"You rummage in the sharp, slimy pile of bones in search of something useful..." 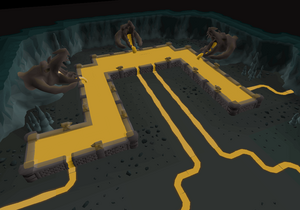 In the south-west corner of the cave lies a set of steps. This leads to a closed off section of the upper level leading to the dragon forge, which was used by dragonkin to forge dragon equipment out of Orikalkum. The forge contains a large basin, 3 dragon heads made out of metal, and many anvils. There are channels in the side of the basin and marks in the floor where lava would flow from the mouths of the dragons and into the basin, then flows out again and runs along the floor, out of the room.

During Dragon Slayer II, players reignite the forge by unlocking the mithril door on the upper level using an ancient key found in a dragonkin laboratory underneath Ungael. Inside the mithril door are three hanging dragon heads and a giant orb in the centre. The player must click on each head to light it using Fire Wave or Surge, which will cause them to have fire appear in their mouths.

Once the orb in the chamber is lit, the forge becomes filled with molten lava. During the quest, players reforge the dragon key here, but after the quest, players can smith dragon kiteshields and platebodies by using the appropriate parts.

The cavern hosts several different high level monsters that all wander the lower level. However, they are not that difficult, sticking to one style of combat that can easily be defended against with Prayer. Waterfiends can use all three combat styles, making them more of a challenge.

Although dragons are often the main interest of the dungeon, many of the other monsters boast high hitpoint and melee stats and players should remain wary. When not in combat, players are still susceptible to surprisingly dangerous attacks. Monsters such as the Waterfiend have caught many adventurers unaware or on the retreat. 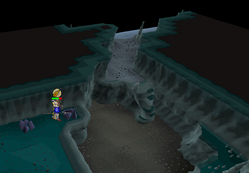 The formerly inaccessible area within the Ancient Cavern as seen before the release of Dragon Slayer II.