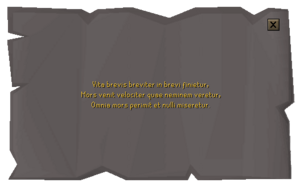 The Ancient Plaque's inscription as seen in game.

An ancient plaque can be found outside of Nex's chamber, inside the God Wars Dungeon.

When read, the plaque displays the following:

The following text is transcluded from Transcript:Ancient Plaque.

The text, which is in Latin, is translated as such:

Life is short, and will shortly end,
Death comes quickly, which fears no one
Death destroys all, and has pity for none.