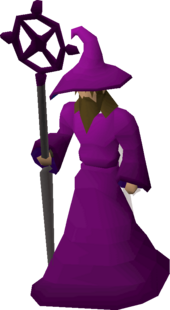 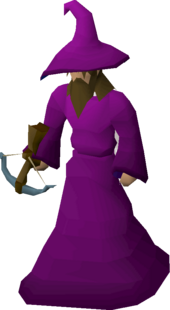 Ancient Wizards appear when doing master clue scrolls when the player digs for a clue directed by the strange device or coordinates, in multicombat areas. Each wizard uses a different attack style and can hit fairly high, requiring players to be prepared for a three-on-one fight.

The wizards are much stronger than their combat levels suggest, as most of their combat levels are due to their offensive stat levels. Together, they are comparable in damage output to a God Wars Dungeon main boss. The goal should be to kill them as quickly as possible, especially if there are no obstacles to get two of three wizards stuck behind. Super sets, bossing food such as sharks or tuna potatoes, and food for tick-eating such as karambwan and/or pineapple pizza are highly advisable.

Ancient Wizards have low Defence, so melee or Ranged is advised. Magic is not advised as they are resistant due to their high Magic level. It is worth noting the melee-using wizard has a significantly higher maximum hit than the rest of the wizards, so activating Protect from Melee is highly recommended while under attack by this wizard. Armour such as dragonhide armour is recommended.

If available, the player should make use of nearby obstacles to limit the number of wizards able to attack the player at once. The other wizards cannot be used to safespot the melee wizard, he will simply walk through them. It is advised to kill the wizards in this order: Melee (if he cannot be safespotted), Ranged, and finally Magic, using the equivalent protection Prayer matching the style of the target wizard each time.

All three wizards will open combat with their special attacks, which hit hard and hit fast. However, their damage output decreases significantly after this first volley. Don't allow this warning to lead one into complacency.

A form of antipoison is recommended as the melee-using wizard is capable of poisoning the player.

For Ancient Wizards fought in the Wilderness, bring items you are prepared to lose. 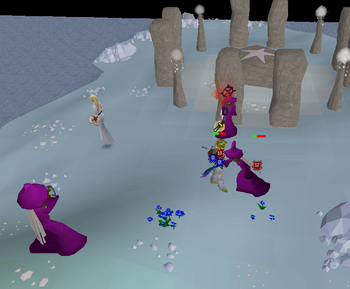 Drop rates estimated based on 202,394 kills from the Drop Rate Project, unless otherwise cited.

There is a 5/50 chance of rolling the herb drop table.

There is a 3/50 chance of rolling the allotment seed drop table.