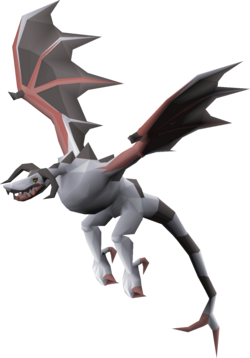 Ancient Wyverns are Slayer monsters that require a Slayer level of 82 in order to be harmed. They reside in the Wyvern Cave on Fossil Island and are the strongest species of Wyvern in Old School RuneScape. Like other Wyverns, they require an elemental, mind, dragonfire or ancient wyvern shield to be equipped in order to be slain.

In addition to being harder to fight, Ancient Wyverns share the ability with Taloned Wyverns to use an unblockable Ranged attack that resembles a lighter coloured Water Blast. This attack ignores Protection prayers and hits around 10, though they can also miss. They also appear to use all Melee attack types. When fighting them, the highest defensive armour the player can access is best suited to use against them.

There is a 2/134 chance of rolling the tree-herb seed drop table.

There is a 2/134 chance of rolling the rare drop table.