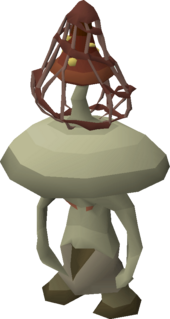 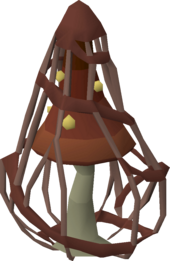 Ancient Zygomites are stronger variants of mutated zygomites that require level 57 Slayer to harm. They are found exclusively on Fossil Island in the Mushroom Forest. Ancient zygomites cannot be killed unless a fungicide spray has been used to deliver the final blow. They first appear as non-attackable Ancient Fungi, which players must pick in order to provoke them out of the ground.

Players who have been given a mutated zygomite Slayer task can choose to kill these as an alternative for the task, unless the task was given by Konar quo Maten and Zanaris was specified. Likewise, if she assigns a task for Mutated Zygomites on Fossil Island, players will be required to kill Ancient Zygomites since there are no mutated variants on the island.

Ancient Zygomites use both magic-based melee attacks and magic-based ranged. Armour with a low magic defence bonus such as rune will typically have a higher chance of being hit, therefore dragonhide armour or Karil's armour if you can afford it is strongly recommended while fighting them, as its higher magic defence will reduce the chance of being damaged. If praying against their attacks, Protect from Missiles is recommended, as their ranged attacks are stronger and more accurate than their melee attacks.

It is possible to safespot them by trapping them and standing at least 7 tiles away from them, since their maximum range for the ranged attack is only 6 tiles.

There is a 1/20 chance of rolling the gem drop table.