From Old School RuneScape Wiki
Jump to navigation Jump to search
The RuneScape Wiki also has an article on: rsw:Ancient artefacts 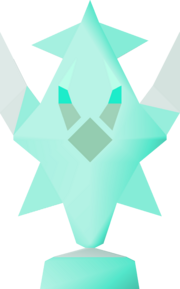 Ancient artefacts are items dropped by revenants in the Revenant Caves. These can be exchanged for large quantities of coins by speaking to the Emblem Trader wandering around the caves.

Ancient artefacts cannot be protected upon death. Players will always lose artefacts if they are killed, even if they are the only item in the player's inventory.

The artefacts can only be given to the Emblem Trader in the Revenant Caves; it cannot be exchanged in Edgeville. In addition, players must exchange the artefacts on the official Bounty Hunter world.

When exchanging artefacts, it is highly recommended to bring teleport items that allow teleportation up to level 30 Wilderness, such as dragonstone jewellery or a royal seed pod. This is because being in the Wilderness on the Bounty Hunter world informs the player's target of the wealth they carry and the Wilderness level they are in - they may then use the Teleport to Target spell to quickly reach the player as a result.

If players are unwilling to risk bringing the artefacts to the Emblem Trader in the Revenant Caves, they may sell them to other players or on the Grand Exchange, or cast Low or High Level Alchemy on them to get 40% or 60% of the price the trader would have bought them for respectively.