The ancient gorilla greegree is made from a monkey skull and monkey talisman. When wearing this greegree on Ape Atoll or some places in the Ardougne Zoo, the player will turn into a gorilla with a blue face. This item can only be obtained after completing the hard tasks of the Western Provinces Diary.

The chathead of the ancient gorilla is black much like an Elder Guard, rather than blue which is how it appears in-game. 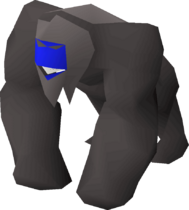 A player transformed into a blue-faced gorilla300? (edit)? (edit)