From Old School RuneScape Wiki
(Redirected from Ancient magicks)
Jump to navigation Jump to search
The RuneScape Wiki also has an article on: rsw:Ancient Magicks
"Ancients" redirects here. For other uses, see Ancient. 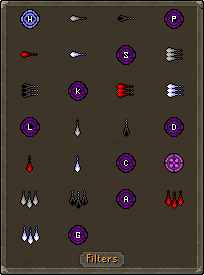 Ancient Magicks (also known as Ancients) are a series of Magic spells unlocked upon completion of the quest Desert Treasure. Unlike the Lunar spellbook, which primarily focuses on utility spells, and the standard spellbook, which is a mixture of combat and utility spells, the Ancient Magicks is significantly combat-oriented, including some of the most powerful combat spells in the game.

The Ancient Magicks are a long forgotten and destructive set of spells. In the Second Age, they were very commonly used, mostly by the followers of Zaros, who ruled a very large empire at that time.

The destructive and powerful spells of the Ancient Magicks proved to be useful during the wars in the era. The Spellbook also contained various teleport spells, which made it easier for the Zarosians to travel across their empire, which stretched from the northern Wilderness, to northern Misthalin and north-western Morytania.

Unfortunately, knowledge of Runecraft was lost before the Second Age and the remaining supplies Guthix provided humans in the First Age slowly disappeared through the use of Magic. Back then, many wizards held battles with the few remaining runes as a prize.

After Zaros' banishment following the Betrayal of Zaros, Zamorak and other gods like Saradomin, destroyed the empire. The destruction of the empire and the slow disappearance of runes caused the Ancient Magicks to become a rarely used form of Magic. During this time, only the Mahjarrat used Ancient Magicks, mostly because they didn't need runes to use Magic.

The God Wars held after Zaros' banishment saw the slow fade of the Ancient Magicks from common knowledge. Many of the remaining followers of Zaros, who comprised the majority of spell-casters, were killed or imprisoned. The powerful spells caused much destruction during the enormous battles, although the number of people who knew about the spells was extremely limited.

Long after the end of the God Wars, at the beginning of the Fifth Age, the art of Runecraft was rediscovered, giving humans a new supply of runes. New spells were invented by modern wizards of the Wizards' Tower, driving the Ancient Magicks even further into obscurity. Today, Ancient Magicks are used almost exclusively by the Mahjarrat, who have been driven close to extinction in Gielinor. A handful of people, such as Solus Dellagar, still possess the knowledge of Ancient Magicks. But furthermore, most mages of Gielinor choose to practice the modern magic created at the Wizards' Tower. Players will learn about the Ancient Magicks during the Desert Treasure quest, where they release the imprisoned Zarosian Mahjarrat Azzanadra.

Because unlocking the Ancient Magicks spellbook requires completion of the Desert Treasure quest, the following quests are also required:

Because of these quests, the skills required to obtain the Ancient Magicks can be seen in the table to the right.

Once Desert Treasure is completed, the easiest way to switch spellbooks for normal accounts is to use another player's POH. To find a house to use, use the Grouping interface and select "player owned houses" from the drop-down and use the Clan Chat to find a house with either an Ancient altar or an Occult altar. Most players who have houses publicly open will use the portals in Yanille & Rimmington. Keep in mind that this method will not work for Ironman Mode.

Players can switch to Ancient Magicks at the altar inside the Jaldraocht Pyramid (simply "Pyramid" on the World Map) in the Kharidian Desert, south-west of Pollnivneach and north of Menaphos. There is a rear entrance (tunnel) to the south of the pyramid that allows players who have completed Desert Treasure to enter the throne room directly, where the altar resides, without having to navigate the four floors of the pyramid. At the altar, players can pray to switch to or from the Ancient Magicks spellbook, though this drains all Prayer points to zero (players can still switch spellbooks even with 0 Prayer points).

Those who simply wish to switch from Ancient Magicks to the regular spellbook may find it easier to pray twice at the Astral Altar on Lunar Isle, provided Lunar Diplomacy has been completed. Alternatively, players may also switch spellbooks twice with Tyss at the Dark Altar (easily reached with fairy ring code CIS if the player has activated it), provided they have 100% Arceuus favour.

Players who have level 80 in Construction can build an ancient altar within their Achievement Gallery, allowing them to freely switch between the standard and ancient spellbooks without the prayer drain.

Additionally, players who have level 99 in Magic can switch their spellbook up to five times per day with the Magic cape.

Various methods of teleportation exist for reaching the Jaldraocht Pyramid:

Unlike the standard spells, Ancient Magicks combat spells can only be autocast with particular Magic weapons. The weapons are:

The Ancient Magicks combat spells are, as mentioned, the most dangerous combat spells in the game. Not only can they deal a substantial amount of damage, but each of the four classes of combat spells has a different additional effect:

The specific duration/effectiveness of each of the standard effects (aside from the blood spells, which always heal a flat 25%) depends on the level of the spell cast; for example, Smoke Burst will deal more poison damage than Smoke Rush. In addition, the Burst and Barrage spells are area-of-effect spells, which will hit the target and any other player or NPC standing in a 3x3 zone around the target in a multicombat area. The Rush and Blitz spells only hit a single target.

Some monsters are large, meaning that they take up more than one square of space. When a Burst or Barrage spell is cast on one of these monsters, it will hit the monster plus any surrounding monsters with any square of space standing within a 3x3 zone of the targeted monster's south-western-most corner square, which is treated as its "origin" square.

While less popular for general training, Ancient Magicks is often used in various player-versus-player activities, such as the TzHaar Fight Pit and Castle Wars. Ice spells, specifically Ice Burst and Ice Barrage, are especially popular, due to their freezing effects and lower cost when compared to other combat spells.

Ancient Magicks are not allowed in Barbarian Assault.

A player teleporting with Ancient Magicks.

Teleport spells from the Ancient Magicks teleport players to former strongholds and settlements of the Zarosian Empire, some of which are located in the Wilderness.