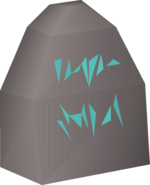 The ancient tablet is obtained as a possible reward from the Chambers of Xeric. It is used on Xeric's talisman, or one that is mounted in a Portal Nexus room, to allow it to teleport to Xeric's Honour, otherwise known as Mount Quidamortem. Using the tablet on any Xeric's talismans will unlock the teleport on all subsequent talismans as well, including ones mounted in the PoH.

When the tablet is inspected, the chatbox message states You inspect the tablet, and sense a magical power, running your fingers over the inscriptions, they tingle as you get a feel for Xeric's power. He must have stored one of his best spells in this tablet, perhaps he has some sort of device which could utilise it?

Once the player uses the tablet on the talisman, the chatbox message states As the talisman and tablet are held together, a surge of power connects the two. After a brief moment, the tablet crumbles, and the talisman feels somehow different.