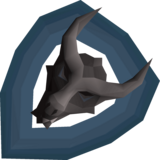 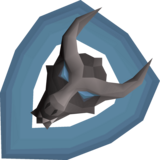 The ancient wyvern shield is a magical shield requiring a Magic level of 70 and a Defence level of at least 75 to equip, as well as having started Dragon Slayer I. It is one of the best Magic shields in the game, with stats comparable to that of the arcane spirit shield when fully charged, although lacking the extra 5 Magic attack bonus while having negative Melee and Ranged attack bonuses. However, it provides far superior defence.

The shield offers two special characteristics: it acts like a regular anti-dragon shield in terms of dragonfire protection, and it also protects against the icy breath of Wyverns, similar to the elemental, mind, and dragonfire shields. However, to the distinction of the elemental, mind, and other dragonfire shields, the ancient wyvern shield will also grant an immunity against the freezing effect from a wyvern's icy breath. This immunity, on the other hand, does not extend to draconic creatures capable of producing a similar effect (KBD, Vorkath, etc).

When the shield is obtained, it is uncharged and offers similar defensive bonuses to those of an adamant sq shield. When fully charged, it offers melee and magic defensive bonuses slightly higher than those of the dragonfire shield while having far worse ranged defence. 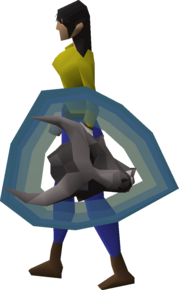 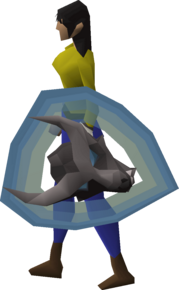 The ancient wyvern shield is created by using a wyvern visage on the northern strange machine in the House on the Hill while having a hammer and an elemental shield in the inventory. The creation process requires level 66 in Magic and Smithing, granting the player 2,000 Magic and Smithing experience, but the player's Magic level will be completely drained to 0. When this occurs, a chatbox message will appear, stating At a great cost to your personal magical energies, you have crafted the wyvern visage and elemental shield into an ancient wyvern shield.

The wyvern visage is dropped exclusively by Fossil Island Wyverns found in the Wyvern Cave, including the Spitting Wyvern, Taloned Wyvern, Long-tailed Wyvern and Ancient Wyvern. Skeletal Wyverns do not drop the wyvern visage; instead, they drop the draconic visage.

To charge the shield, players will need to use fossils or numulites on the shield, which are obtained from performing activities in Fossil Island. Players can right-click Recharge in the Worn Equipment tab to charge it, providing they have the required items in their inventory. Every charge increases its defence bonuses by +1, to a peak of a +50 Defence increase. However, its Magic Defence will remain the same.

During combat, the ancient wyvern shield can be operated to expend one charge, unleashing a freeze blast attack (akin to those of wyverns) at a target, which can hit approximately 15 damage (slightly less than the melee and ranged variants). This attack can only be used once every two minutes, and each expended charge reduces the shield's Melee and Ranged defensive bonuses by one. The freeze blast can be used at range (up to 10 squares away) and over obstacles, after which the user will initiate a normal attack with their equipped weapon, if possible. The damage splat is rolled in accordance to the user's Defence level and target's Magic Defence bonus.

In addition, if dropped on death in an unsafe environment, when recovered, the ancient wyvern shield will be completely uncharged.