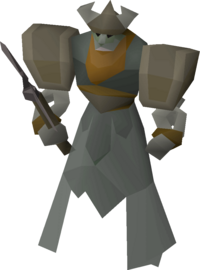 An Angry barbarian spirit is found in the Ancient Cavern, along with many other high-levelled monsters, including Mithril dragons. They are quite high hitting (with a maximum hit of 18) but have low accuracy.

These monsters are not considered to be undead (as indicated when trying to cast Crumble Undead on them), so a salve amulet or salve amulet (e) will not help.

The average Angry barbarian spirit kill is worth 601.96.