Animal Magnetism is a quest during which the player helps Ava in Draynor Manor. The quest is required to access Ava's devices, robust ranged cape slot items.

To start the quest, talk to Ava on the ground floor in the west wing of Draynor Manor. You'll have to search a bookcase to open a secret door to get to her.

You will find out she is the new assistant of the professor at the top of the manor. She tells you she will make you something if you can get her some things to fix her bed. She will ask you for two undead chickens.

Items needed: A ghostspeak amulet and 20 ecto-tokens (or 4 bones, 4 empty pots and 4 empty buckets to obtain the ecto-tokens during the quest)

Travel to the undead chicken farm west of the Ectofuntus with your ghostspeak amulet and ecto-tokens, and talk to Alice. If you do not have enough ecto-tokens, see the Ectofuntus page on how to make them. The simplest way to reach Alice is using an Ectophial (after completing Ghosts Ahoy).

After finishing the conversation with Alice, talk to her husband's ghost, who roams the farm near the undead cows. Communicate a bit between Alice and her husband until he explains that he wants to speak to her directly. In order to make that happen, you must travel to the Old Crone and have her make a modified ghost-speak amulet for Alice's husband. The Old Crone resides east of the Slayer Tower. Speak to her, while still wearing the ghostspeak amulet, and she will give you a crone-made amulet. You will make a remark about Ghosts Ahoy if you have completed that quest. 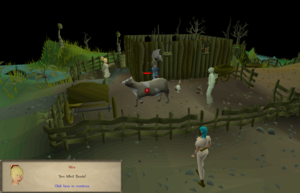 Deliver the amulet to the husband at the farm, and talk to him again. An amusing cutscene will play, involving a fake player character named Cow31337Killer. Alice's husband will then finally offer to sell you undead chickens (for 10 ecto-tokens each). Purchase two of them.

Return to Ava and hand her the undead chickens. Wielding one of them during the conversation will lead to some humorous dialogue. Ava will now request a magnet.

Speak with the witch in a room nearby. She will give you a selected iron for 5 iron bars, and instructions on how to turn the iron into a magnet. Travel to the centre of the mine north-east of Rimmington, and use a hammer on the iron while facing north. This will turn it into a bar magnet.

Head back to Ava with the magnet. You will be granted 50 Crafting experience when you give Ava the magnet. She will tell you she needs undead twigs from one of the undead trees around the manor. Attempt to cut one of these trees, and you will find it cannot be done with a regular axe. Return to Ava to ask her for a solution, and she will refer you to Turael in Burthorpe, who has apparently been using his Slayer skills to figure out a way to defeat the undead trees. 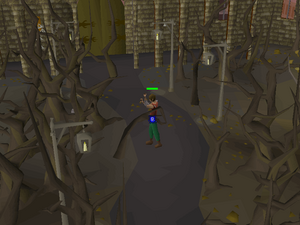 Talk to Turael. Make sure you don't accidentally request an unwanted Slayer task from him. Turael will grant you a blessed axe in exchange for a mithril axe and a holy symbol. He will not accept another type of axe. With the blessed axe, return to Draynor Manor and chop an undead tree until you receive some undead twigs. 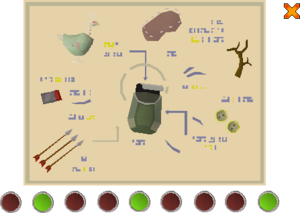 Deliver the twigs to Ava. She will tell you she has almost completed her invention, but some of the research notes she has gathered still need to be translated. You can translate these notes by selecting the correct buttons that appear on screen. You can use the picture for the solution.

Once you have ungarbled the notes, talk to Ava, and she will tell you the last items she needs to finish the device; some hard leather and polished buttons. Combine these two items with the pattern given to you to create a container. Hand the container over to Ava to complete the quest. 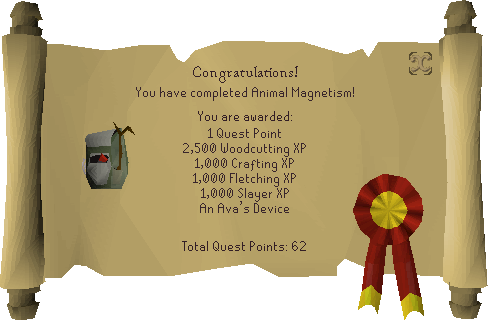 Completion of Animal Magnetism is required for the following: