From Old School RuneScape Wiki
Jump to navigation Jump to search
The RuneScape Wiki also has an article on: rsw:Animated Mithril Armour

Animated mithril armour is a player-created foe encountered at the Warriors' Guild. To summon one, players must use a mithril platebody, mithril platelegs, and a mithril full helm on the magical animator. This mithril version is commonly used to farm tokens, due to the fact that it is relatively easy to defeat with lower stats. If you are a high level with access to decent equipment, fighting rune would be a quicker alternative to earn tokens.

Whilst the mithril variant is considered to be a relatively easy target, it is still advised to bring along some food since it can hit up to 10. The player will always have all of their mithril armour parts returned to them when it is defeated; however, any armour below black will lose pieces. Like all other variants, it is immune to Magic and Ranged attacks.

When you place the armour on the magical animator, this text will appear over your chatbox: 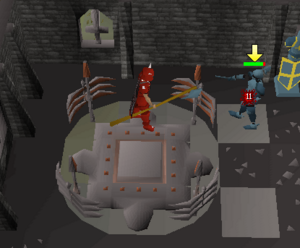 You could safespot the animated mithril armour by using a halberd, preferably a crystal halberd. That said, you can use any type of halberd as long as you have the required stats; a rune halberd ought to be sufficient. After the armour spawns, run to the spot shown in the image to the left. The animated armour will be trapped next to the platform, allowing you to attack it without taking any damage.