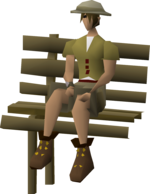 Louisiana 'Anna' Jones[1] is a freelance archaeologist. She plays a minor role in the What Lies Below quest and can be found north-east of Varrock, near the statue of Saradomin.

Anna once worked for the Varrock Museum, but left to pursue a career independent from the museum.[2] She is vague about the purpose, or employer, of her current investigation and will instead attempt to confuse the player when inquired.[3][4]

During the events of What Lies Below, it is revealed that her employer is Surok Magis, whom she is assisting to excavate the Tunnel of Chaos. She will provide the player with a Bronze pickaxe if they choose to access the Chaos Altar through the tunnel.