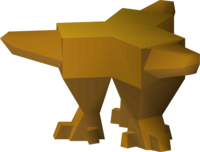 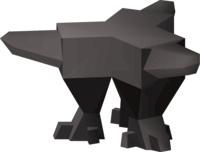 An anvil is used to smith items through the Smithing skill. An anvil can be used to smith items by using a bar on an anvil while the player wields an Imcando hammer or has a hammer in their inventory, and then a selection screen will come up. Multiple players can use an anvil simultaneously.

icon on the minimap and world map.

The most convenient anvil may be that in western Varrock, since it is directly opposite a bank and close to the Grand Exchange. Players who have completed Song of the Elves can use the anvil in Prifddinas near the south-eastern bank, and it is the closest to a bank and a furnace.

There are several unusual anvils in RuneScape. Included among these are the experimental anvil that players use in The Tourist Trap to help make a prototype dart and the barbarian anvil in Otto's Grotto, used to smith spears and hastae. Additionally, the rusted anvil in Lumbridge allows players to smith only bronze items.