From Old School RuneScape Wiki
Jump to navigation Jump to search
The RuneScape Wiki also has an article on: rsw:Ape Atoll
This article is about the island. For the monkey village, see Marim.

Ape Atoll is an island in southern Gielinor. It is inhabited only by monkeys, who are ruled over by King Awowogei. It is only accessible to players who have partially or fully completed the Monkey Madness I quest. Players who have not taken the form of a monkey or gorilla with a greegree will find almost every monster on the atoll to be highly aggressive towards them. Once Monkey Madness II is completed, however, a greegree is not necessary as all surface inhabitants will be tolerant towards the player. Monkey zombies and skeletal apes, which are underground, are still aggressive to players not wearing a greegree.

The island is populated with Monkey Guards, Monkey Archers, poisonous snakes and spiders, mobs of zombie monkeys, and natural hazards including a cave that is slowly collapsing on top of you. The island is one of the most dangerous places in RuneScape, especially to inexperienced players.

Initial access to the island is obtained through the quest Monkey Madness I. You can go to Ape Atoll by going to the 1st floor[UK]2nd floor[US] of the Grand Tree and speaking to Daero. He will then take you to a bunker where you can speak to Waydar who will take you to Crash Island from which you can speak to Lumdo to visit Ape Atoll.

Fairy ring code CLR is accessible after completing Monkey Madness I and Daero's training. However, 48 Agility and a ninja monkey greegree are required to exit the Ape Atoll Agility Course and travel to the city. Without a ninja greegree equipped, jumping over the river with the rope will fail the obstacle. If Monkey Madness II is not completed players are put in jail.

Players who have completed Monkey Madness II can take a glider from the Grand Tree to the island.

The level 64 Ape Atoll Teleport after saving Awowogei in Recipe for Disaster, in the normal spellbook, takes the player to the altar in the north-east corner of Ape Atoll.

There is also a teleport spell in the Arceuus spellbook, requiring level 90 Magic to cast, as well as the equivalent magic tablet. This spell takes players to the tunnel on the southern part of the island. 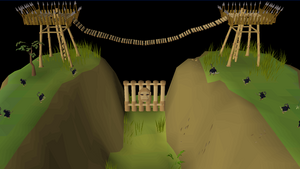 The player is thrown in prison as a part of the Monkey Madness I quest. Two guards, Trefaji and Aberab, take shifts in the prison. If they catch you in human form, they will beat you up for moderate damage and throw you back in the cell.

The Temple of Marimbo is located at the north-east corner of the city, the temple is home to several Monkey Guards. The temple is a very popular training area, as there is a prayer altar inside. Players can use the Protect from Melee prayer to avoid damage, and battle the Monkey Guards indefinitely, as long as Monkey Madness II is not completed.

Up the stairs near the altar is Hafuba. Hafuba is tolerant towards all players, regardless if they are using a greegree or not.

The marketplace is home to several notable features. Chief amongst these is the Scimitar stall, currently the only known source of Dragon scimitars, except for as a rare drop from spoils of war, the thermonuclear smoke devil, demonic gorillas, or Scorpia. Other (thievable) stalls include the magic and banana stalls. It also has a bank chest and Jumaane, both of which are only accessible after completing Monkey Madness II.

The Ape Atoll Agility Course features one of the best training grounds for high level Agility training. At lower Agility levels, the failure rate on obstacles makes efficient training unfeasible. You will need a ninja monkey greegree in order to use the agility course.

Ape Atoll also features a decent supply of hardwood trees. Just outside the main gate there are mahogany trees. At the south-east part of the island there are three teaks. The mahogany tree is reasonably close to the Ape Atoll teleport and the teak trees are a short distance from the Ape Atoll Dungeon teleport.

There are three dungeons on Ape Atoll: the Ape Atoll Dungeon, the Temple of Marimbo Dungeon, and Kruk's Dungeon. The first two's inhabitants consist of the undead; Monkey Zombies and Skeletal apes. Skeletal apes are only found in the large chambers of the Ape Atoll Dungeon, and are often killed with AoE attacks like chinchompas and burst/barrage spells for high experience rates, as they are aggressive towards players who are not wielding a greegree.

Kruk's Dungeon is accessible during and after Monkey Madness II. A much larger dungeon, Kruk's Dungeon houses a hunting area once the quest is complete. The many Maniacal monkeys in the underground levels provide even better experience rates than the skeletal apes, as there are much more monkeys sharing the same aggression range and drop prayer potions frequently to negate the need of bringing many prayer potions. A light source is needed for the underground levels.