From Old School RuneScape Wiki
Jump to navigation Jump to search
The RuneScape Wiki also has an article on: rsw:Ape Atoll Agility Course

The Ape Atoll Agility course is an Agility training area located near Marim, available to players with level 48 Agility (cannot be boosted). Access to this course requires completion of Chapter 2 of

Monkey Madness I. To access the Agility course, the player has to wear a Ninja or Kruk monkey greegree.

Monkey Madness I to access. The Agility course consists of six obstacles that players can pass in return for Agility experience. If all obstacles are passed in the correct order, some bonus experience is rewarded at the end of the lap. All of the obstacles can be failed by the player, resulting in small amounts of damage. Failed obstacles have to be tried again before going for the next obstacle, in order to become eligible for the bonus experience at the end of the lap. Players with higher Agility have a higher success rate at passing the obstacles. After reaching level 75 Agility, obstacles on the course can not be failed.

It takes 20,387 laps of the course to reach level 99 Agility from level 75, with no failures of obstacles due to a 100% success rate from level 75 and above. That is equal to more than 9 complete days of non-stop training at this course.

There are several different methods for travelling to the Ape Atoll Agility Course. The best options, ordered from fast to slow, are:

One reasonably popular method of training on this course is to take a large number of Summer pies or Agility potions (at levels 70 and 72, respectively) to maintain a constant Agility level of at least 75, because the player will never fail an obstacle at this level. Doing this ensures that the player can obtain the maximum hourly experience rate starting at a level well below 75. However, if a player starts this at the minimum level, the boost will only last a minute before requiring another stat boost. Therefore, it is recommended to have at least level 72 to use summer pies and 73 for agility potions, so that the boost can be profited from a little longer.

Note: Laps will only count towards the backpack total if all obstacles have been passed in the lap. The most recent obstacle passed will be remembered if a player teleports mid lap. Players looking to restore energy should teleport from hill with the fairy ring to get credit for the half completed lap when they return to the course. 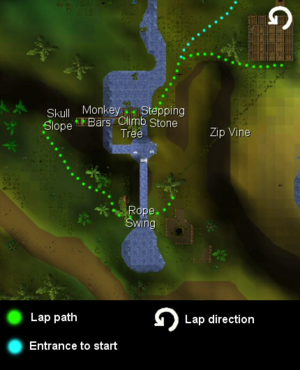 The route taken to complete the course.

Due to the success rate of the obstacles, the experience rates scale with the player's Agility level. At level 75 and higher expect to be able to complete a maximum of 95 laps per hour (63 ticks per lap), resulting in 55,800 Agility experience per hour.

At lower Agility levels expect to get around 40,000-45,000 Agility experience per hour.