From Old School RuneScape Wiki
Jump to navigation Jump to search
The RuneScape Wiki also has an article on: rsw:Apmeken
Apmeken? (edit) 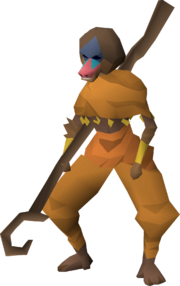 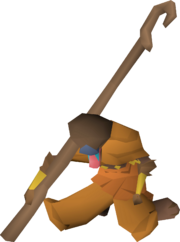 Apmeken (Jagex pronunciation: AP-muh-ken) is the lesser goddess of companionship and one of the four minor gods of the Menaphite Pantheon, a collection of deities that rule over the Kharidian Desert. According to legend from the Book of Light and Day, she was created from the first of four dreams that the main god Tumeken once had over four days.

Apmeken is the most playful, unpredictable, and mischievous of all of the minor deities of the desert according to Jex, and is this priest's personal favourite deity. Apmeken can change her appearance at will, although she always has the head of a monkey, ape, or baboon, depending on the exact nature that she is displaying. The monkey represents skilfulness, the ape is wise, and the baboon, in nearly all situations, is comical. Only the first form has a tail.

Her following comprises a variety of people, from liars to scholars. According to the sphinx, Apmeken is 'good for a chat but prone to exaggeration,' suggesting that the two have met, although the sphinx is unwilling to either confirm or deny this.

A manifestation of her can be encountered during Icthlarin's Little Helper. If the player picks up the ape-headed canopic jar containing the intestines, the player can fight the manifestation. However, fighting her is not necessary to finish the quest.

During Beneath Cursed Sands it is revealed that she, alongside Crondis, Het, and Scabaras, have been captured and corrupted by Amascut who had hunted them down over the centuries. They have all been taken to the Jaltevas Pyramid, the tomb of Osmumten, where Amascut plans to use two ancient weapons against them to steal their divine energy and ascend from a demi-goddess to a true goddess.