From Old School RuneScape Wiki
Jump to: navigation, search
The RuneScape Wiki also has an article on: rsw:Arboretum (location)
Arboretum 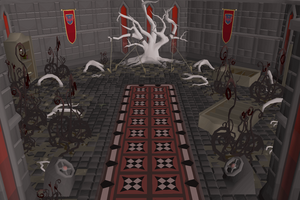 The Arboretum is the "vault" for the infamous Blisterwood Tree, found in the upper tier of Darkmeyer. Lord Drakan had spent centuries attempting to destroy the tree, but failed. He simply locked it up in the building, forbidding anyone to enter it. It is meant to keep the Blisterwood Tree, an extremely dangerous wood to vampyres, out of accessible hands.

During Sins of the Father, the Arboretum is guarded by Desmodus Lasiurus, who only lets the player in after helping him retrieve his slaves back from Lord Alexei Jovkai.