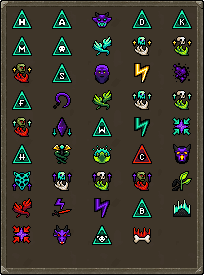 The Arceuus spellbook, sometimes referred to as the necromancy spellbook, is a spellbook that players can access upon gaining 60% favour with Arceuus in Great Kourend. Like the standard spellbook, it has a variety of combat and utility spells at its disposal, unlike the Lunar spellbook, which is primarily focused on utility spells, and the Ancient Magicks, which is heavily combat-oriented.

Making extensive use of blood, nature and soul runes, this spellbook is notable for its reanimation spells used in prayer training, and is also known for its vast array of teleportation spells which primarily transport players to destinations associated with death, such as graveyards and dungeons occupied by the undead. In addition, a larger set of combat and utility spells are accessible to players who have completed the quest, A Kingdom Divided.

Players may speak with Tyss to switch to the Arceuus spellbook. Tyss can be found near the Dark Altar on the north end of Arceuus. Players can get to Tyss by using the fairy ring code CIS; however, the fairy ring needs to be unlocked by speaking to the nearby NPC, Trossa, for a one time fee of 80,000 after unlocking the use of fairy rings in the Fairytale II - Cure a Queen quest. Another option is to use the games necklace teleport to the Wintertodt Camp and run south-west until the snowy area exit, then run east afterwards.

Alternatively, players who have level 80 Construction can build a dark altar within their Achievement Gallery, allowing them to freely switch between the standard and Arceuus spellbooks without having to travel to the real Dark Altar.

A player uses a teleport spell from the Arceuus spellbook.

Players are free to use all teleportation spells upon unlocking the Arceuus spellbook; completion of A Kingdom Divided is not required.

The combat spells of the Arceuus spellbook possess a mix of offensive and support spells, which includes spells to resurrect thralls, which fight alongside the player for a set amount of time.

With the exception of Ghostly Grasp and Inferior Demonbane, all combat spells in the Arceuus spellbook require completion of the quest A Kingdom Divided.

Offensive Arceuus spells can only be autocast with particular magic weapons:

Grasp spells deal damage and provide a chance to stop the target from moving for a short time. Successful hit chance and the duration applied are doubled on targets that are under the effects of the Mark of Darkness spell. However, if the target is under the effect of the Ward of Arceuus spell, they will only be bound in place for 0.6 seconds if successfully bound by the caster.

Demonbane spells deal damage (with a 20% accuracy bonus) much like any other offensive spells, but can only be cast on demonic creatures. They will have an additional 25% damage and 40% accuracy bonus if cast on demons that are under the effects of the Mark of Darkness spell.

Players cannot cast corruption spells on a player if they are currently corrupted, nor can they do so while the target is under the effects of the Ward of Arceuus spell. There is no immunity period after corruption wears off on a player.

Requires having the book of the dead equipped or in the player's inventory (which is obtained upon completion of A Kingdom Divided), casting resurrection spells require prayer points in addition to runes, and will summon a thrall that attacks the same target that the player is attacking for a certain amount of time (

Players can only summon one thrall at a time, and it cannot attack other players. Thralls have an attack speed of 4 (attacking every 2.4 seconds), cannot be damaged, and ignore accuracy checks when attacking.

These spells cannot be used at Basilisk Knights or within the Chasm of Fire.

With the exception of Resurrect Crops and reanimation spells, all utility spells in the Arceuus spellbook require completion of the quest A Kingdom Divided.

Offering spells convert up to three sets of remains to prayer points, granting three times the normal experience of burying or scattering remains. They take the same amount of time as offering three remains at an altar in a player-owned house chapel. 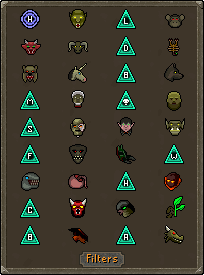 The Arceuus spellbook prior to the merging of reanimation spells.

With an update on 28 April 2021, the spellbook was significantly reduced in size to prepare for the release of the quest A Kingdom Divided.

Some spells designs were cut from the Arceuus spellbook rework, although Mod West had still made spell icons for them and can be found within the game cache.