Architectural Alliance is a miniquest centring around the architects of the five cities of Great Kourend, where the player must earn their trust to rebuild the statue of King Rada I, the first king of Great Kourend, after it was destroyed by a devastating storm.

Location of the statue

Speak with Hosa by the statue of King Rada I in Great Kourend to start this miniquest. The Hosidius architect explains that he wishes to rebuild the statue of King Rada I in the Kourend Castle courtyard after it was heavily damaged in a storm. However, he is unable to receive the assistance of the other architects in their respective cities, and requests that you do so for him.

In order to receive the assistance of a Great Kourend architect, players need to speak with them once they gain 100% favour with their respective city. Once players have spoken to an architect, they will then appear at the statue. In order to complete the miniquest and rebuild the statue of King Rada, players must gain 100% favour with all cities.

The location of the architects are as follows: 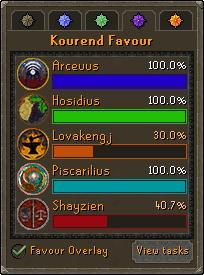 The Kourend Favour interface found within the Quest List interface.

Favour can be earned with houses by doing certain activities for them. These activities are marked on the minimap with the

icon. Favour can be earned with the houses in any order.

The Client of Kourend quest will also reward the player with a Kourend favour certificate that grants 20% favour in a city of their choosing, which can serve as a head start. It is highly recommended to use this certificate on Piscarilius, as its initial favour activities are significantly more tedious than the other houses'.

The following order of activities can be used to gain 100% favour in all cities within around 7 hours. Note that this may not be the fastest or most efficient order, and that these are not the only activities that reward favour. This quick guide method requires at least the following stats: 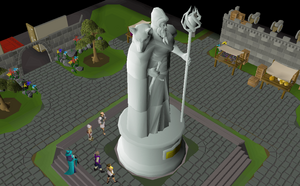 The rebuilt statue of King Rada I.

Once players have gained the support of all five architects from each city, talk with any of the architects at the statue in the Kourend Castle courtyard. During the ensuing cutscene, the architects will rebuild the statue of King Rada I with their combined effort.

Completion of Architectural Alliance is required for the following: