The Ardougne Zoo, located in the southern part of East Ardougne, holds a variety of creatures gathered from across RuneScape. It is RuneScape's only zoo and is involved in a handful of quests. The Ardougne Zoo is the only place outside of Ape Atoll where the player can use a monkey greegree.

The animals are all caged and (excepting the parrots, camels, some penguins and ferret) may be fought by either using a Halberd or by using Magic or Ranged attacks.

The following quests involve the zoo:

RuneScape's one and only postman Postie Pete can occasionally be found at the zoo talking to his brother Parroty Pete.

In the quest Monkey Madness I, a player offers an alliance to Awowogei; in order to proceed, the player must free a monkey from one of the cages. To do so, the player must change into a monkey. This can be done by wielding a Karamjan Monkey Greegree and speaking to a Monkey Minder, who will place the player in the monkey cage. Once a player is in the monkey cage, they can leave by either teleporting or unequipping the monkey greegree and speaking to the Monkey Minder again.

After the quest, players can repeat this process to free more monkeys from the zoo. Doing this doesn't change the number of monkeys inside of the monkey habitat. 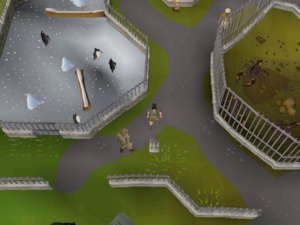 The zoo is featured in a hard clue in which the player can solve by digging by the torch between the penguins and the scorpions.