From Old School RuneScape Wiki
Jump to navigation Jump to search
The RuneScape Wiki also has an article on: rsw:Argento
Argento? (edit) 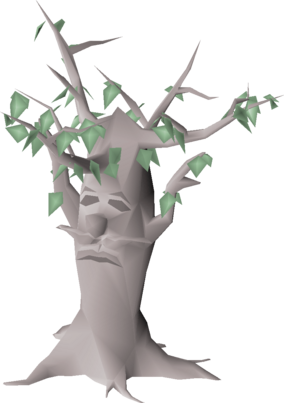 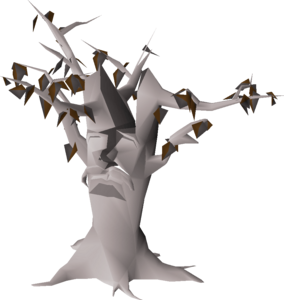 Argento was an old silver spirit tree that once lived on the fringes of the Tree Gnome Stronghold and the only known silver spirit tree to ever live in RuneScape. He died as a result of a powerful spell. His true name is unpronouncable, according to Hazelmere, who named him Argento.

Argento was said to be a kind, wise tree, who was always willing to speak with the gnomes that lived in the Gnome Stronghold. He was a particularly good friend of Hazelmere, a former adviser of King Healthorg. They spent many hours talking to each other during the king's reign. 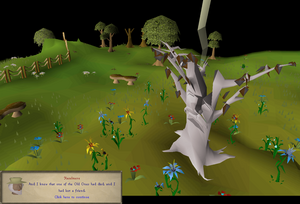 One day, Hazelmere felt a great sadness, as if the Anima Mundi itself was crying out in pain. Hazelmere then suspected that Argento had died, but upon going to see him, found Argento seemingly alive and well, but refusing to talk to Hazelmere. Hazelmere, wondering what had happened to his old friend, went to a fellow adviser, Oaknock, for advice. Oaknock theorised that an illusion had been cast on Argento, and immediately suspected the King's third adviser, Glouphrie, the only person known to be powerful enough to cast such a spell.

Oaknock then constructed an anti-illusion machine, and brought King Healthorg and Glouphrie to Argento's body. Upon turning the machine on, Argento's death was revealed, with Oaknock saying that it must have been Glouphrie. King Healthorg became furious with Glouphrie, asking when it is ever right for someone to lie to their king. Glouphrie's reply that it's sometimes okay infuriates Healthorg even further and he dismisses Glouphrie on the spot, banishing him from the stronghold.

Today, all that remains of Argento is a charred silver stump on the south side of the stronghold, near Brimstail's cave, opposite a statue of Hazelmere.