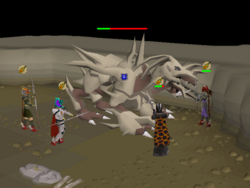 Armour describes any item worn to provide Defence. Defence bonuses decrease a player's chance of being hit. Armour comes in many shapes and forms for all classes giving the player a variety of bonuses to choose from. To wear armour of different metal types, certain Defence levels are required. Good armour is recommended when attacking enemies of a higher level, as the higher defences give the opponent less opportunity to do damage. Players should always have the best armour they can afford and equip although 'the best' may differ from player to player. 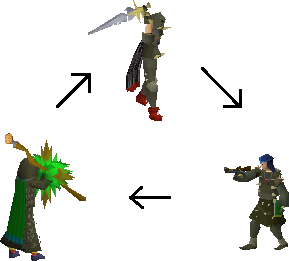 The combat triangle works in a way to make one fighting style weak or strong to another. It's similar to the Rock-Paper-Scissors game.

This doesn't necessarily mean that just because you're melee and you're fighting a ranger you'll automatically win. It's just the way armour, weapons, and spells were structured to keep any one style from being the most powerful. A high-level ranger can defeat a melee user by trapping them behind an obstacle such as a fence, for instance.

There are a wide range of the types of armour, most of which can be made using metals through the Smithing skill. Players can also craft armour from various types of dragonhide, soft and hard leather.

It is a debated subject whether or not a defender is considered armour since it is wielded in the players left hand and gives some Attack and Defence bonuses. Defenders from Bronze to Dragon can be acquired in the Warriors' Guild by slaying Cyclopes, with the Avernic defender being an upgrade for the Dragon defender earned via Theatre of Blood. Many Melee warriors will use a defender in hand-to-hand combat because of its various bonuses, especially in places where Defence isn't really a necessity. These defenders are, however, not able to be traded or sold to any other players in RuneScape.

Some armour provides special effects when the full set of armour is worn. This may make the armour useful for reasons other than just the standard Defence bonuses.