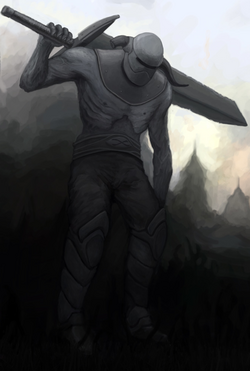 Arrav was a legendary hero from the Fourth Age who protected Avarrocka from the Zamorakian mahjarrat Zemouregal, ultimately sacrificing himself to save the city. A statue of Arrav can be found in the Heroes' Guild next to the statue of Camorra. During his lifetime, Arrav was also known as Arrav of Avarrocka, Curse of Goblins, Hunter of the White Stag, and Child of Sun and Moon.[1] After completion of the Shield of Arrav quest, his shield can be found on display in Varrock Museum. His battle axe can be found on display in the Outpost after completion of Making History.[2]

The Legend of Arrav[edit | edit source]

Main article: The Legend of Arrav 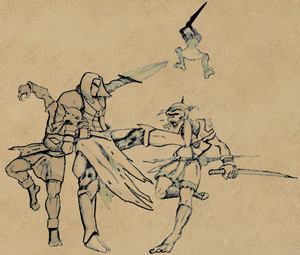 Arrav was born near what is now known as Varrock at some point in the Fourth Age; no record of his birth or parents exists. A group of travellers seeking sanctuary from goblins and ogres found him as a child while following the River Lum. The elders of the tribe saw him as a good omen, and set up camp at this place, naming it Avarrocka. Arrav was raised as their own; he was taught to hunt, farm, and even kill for times were cruel. He was described as unusually tall for someone so young, with dark eyes, fair hair and skin, and a kind smile.[3]

Ten years passed, and the adults of the tribe reckoned Arrav to be around twelve years of age, yet he was still unnamed. As such the elders decided to send the child on a quest to find a name. After a number of days of travel, he discovered an encampment of goblins that planned to attack Avarrocka at night. As the goblins saw him they attacked, screaming "arrav", a word from their language. The goblins were defeated by Arrav, who after returning to Avarrocka and recounting the tale was thenceforth known by the name of "Arrav". As Arrav grew, so did Avarrocka.[3]

One night Arrav visited the Land of Dreams wherein he encountered Zemouregal, who threatened Arrav and his town of Avarrocka. In fright he consulted with the Elders of Avarrocka, who decided the encounter was a bad omen and that Arrav could not remain in Avarrocka. It was at this time that the eldest of the elders who recounted a tale from his youth of a fabulous shield, a shield that did not belong to this world and whose whereabouts was unknown. The elders thus concocted what they deemed an impossible quest to find the shield and sent Arrav away.[1]

Arrav set out to the west, and soon came upon a strange house surrounded by mist. Unafraid, he entered the house and beheld three men heatedly arguing around a table; the language they spoke was unfamiliar, yet he could somehow understand it. The interlocutors, who took no notice of Arrav, seemed to be in a dispute about the ownership of the house they were standing in. One figure complained the others had crept in whilst he slept. Arrav noticed several other smaller figures huddled in the shadows. The speech of the place troubled Arrav, who decided to continue on his way.[4]

Arrav continued his travels, eventually coming across the Imcando dwarves. The Imcando feigned ignorance of the shield when asked, though Arrav was not fooled. Arrav stayed with the Imcando for many days, attempting to gain their trust and perhaps information about the shield. During this respite, Arrav became accustomed to dwarven practices, learning their ways of Mining and Smithing. In due time the leader of the Imcando summoned Arrav, asking why he sought the fabled shield. Arrav explained the threat Zemouregal posed to his town, though in vain: the Imcando feared Arrav and his elders were being manipulated, and that his presense would only alert Zemouregal of their settlement's presence. Thus, with a heavy heart, he was sent away.[5]

As an outcast[edit | edit source]

Though the Imcando had welcomed him and told him they held the shield, he could do nothing but hope the shield could be found elsewhere. However, in all the places he travelled, few knew of the shield, and those that spoke with him paled from his presence at the mention of Zemouregal. And so, Arrav became an outcast, a wanderer with no home. His spirits nearly broken, he entered a cave in which he thought he might spend the rest of his days. This cave was not empty, and he found himself assaulted by a terrible beast, with great talons. The battle lasted two days, until at last light on the second day Arrav's sword reflected the setting sun, blinding the beast which he then slayed. Standing over his fallen foe, Arrav perceived that he was on a ruinous path and astray from his quest. Leaving this fell place, he set out for Avarrocka.[6]

The burning of Avarrocka[edit | edit source]

As Arrav approached Avarrocka, he saw a billowing column of blackened smoke rising from the horizon. Rushing forward, he arrived only to find Avarrocka burned to the ground. In the smouldering remains of the town he encountered goblins, who had razed the place. Searching to the east of the town he found a band of surviving townspeople, and gathering the strongest men, he prepared a counter-attack. Before the attack commenced, he looked upon a comrade, filled with rage, and realised the assault would only cause a perpetual loop of violence and suffering. He took a stand, spoke loudly to the goblins and offered them peace, to which they accepted. The rebuilding of Avarrocka commenced.[7]

Another dream and the shield given[edit | edit source]

With the town rebuilt and busier than ever before, Arrav grew ever more restless. Two years past before he encountered Zemouregal once more in the Land of Dream; this time Zemouregal threatened not only to destroy Avarrocka but all his people wherever they may be. Following this portent, Arrav left Avarrocka a second time.[8]

Arrav returned to the Imcando, knowing the only hope for Avarrocka lied in the mythical shield they possesed. He stood before the Imcando chief, and recounted his second dream of Zemouregal. The chief relinquished possession of the shield at last, bestowing it to Arrav, who after thanking the chief set out for Avarrocka once more.[9] 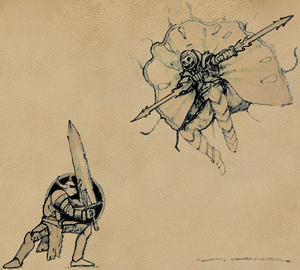 He returned to Avarrocka to see an army massing to defend the town. He went before the elders and presented the shield, and then rested in preparation for the conflict to come.

As the sun rose, a shadow stretched from one end of the horizon to the other, moving forward: Zemouregal's army had come. The two forces clashed and the conflict was bloody. Arrav eventually broke through towards Zemouregal, and engaged him in one on one combat. Even with the shield, Arrav was no match for the mahjarrat, whose physical strength far surpassed that of a human. Realising that he would not be able to defeat Zemouregal and that his doom was at hand, he cast the shield away in hope that someone else might use its powers to carry the day. Tendrils of oily smoke crept from Zemouregal's hands and twisted around Arrav, clutching him tight. For a few moments Arrav struggled then finally he was still. Arrav was dead; however, the shield which he had thrown in desperation had been taken up by the grandson of a town elder, who used its power to destroy Zemouregal's army. Standing alone, Zemouregal was forced to retreat, but not before taking with him Arrav's body, which he reanimated: Arrav thus became one of Zemouregal's undead minions. [10]

Arrav's shield became a prized possesion of the royal museum of Varrock for 150 years; however in the year 143 of the Fifth Age members of the Phoenix Gang broke into the museum and stole the shield. The ruler at the time, King Roald II, placed a 1200 gold bounty for the return of the shield to no avail.[11]

Sometime later, a band of discontented Phoenix Gang members mutinied and branched off into a separate gang, the so-called Black Arm Gang. During this process the shield was broken into two pieces, with one piece remaining with the Phoenix Gang and the other with the Black Arm Gang.[12]

During the Shield of Arrav quest, players must retrieve both pieces of the shield and return them to the Varrock Museum.