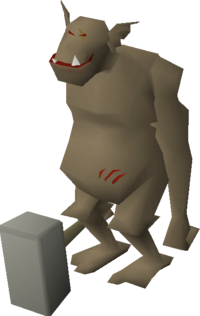 Arrg is a quest monster that must be defeated during Troll Romance. All mountain trolls are named after the first thing they ate or tried to eat. Arrg, however, makes an exception. With some trolls, the name of what they first ate is unknown. This is the case with Arrg, so he was named after the sound made by the first thing he ate. This is the same case with Ug and Aga.

Arrg is the second strongest mountain troll in RuneScape, now being surpassed by Kob from the Monkey Madness II quest. He uses melee and ranged, both of which can hit up to 38, although the Neitiznot shield reduces the maximum damage from ranging to 20. He teleports the player to the Troll arena to fight.

Arrg can only be fought during the quest, and afterwards he can be fought in the Nightmare Zone.

He can be safespotted during the arena fight in a similar fashion to Dad by trapping him behind the mountain wall to the east and standing by the fence. This negates the need to use prayer and simply requires the player to survive the initial hits while moving to the safespot as you start in the center of the arena.

Another way to kill him is to wear at least rune, have 6-8 doses of prayer potion pray protect from melee, and he will rarely hit you with his ranged and only around 4-8 monkfish are needed, if 70 or higher combat. It is best to use a combination of protect from melee and ranged against him and switch prayers as he switches attacks. His attack speed is equivalent to that of a whip, so this can be tricky.

The following drop rates are provided by Jagex, unless otherwise specified. The average Arrg kill is worth 17.56.