From Old School RuneScape Wiki
Jump to navigation Jump to search
The RuneScape Wiki also has an article on: rsw:Arzinian Being of Bordanzan

The Arzinian Being of Bordanzan is a powerful demonic creature from a realm known as Bordanzan that players encounter during the Between a Rock... quest. It can only be harmed if the player has at least six gold ore in their inventory (in which case it will be level 125), however his combat level will decrease to 75 if the player has at least 15 pieces of gold ore. (Note: Do not bring gold ores into the instance, as they will be removed from your inventory) If players bring less than six ores, it will appear blue (with no combat level) and instantly regenerate all its hitpoints every time the player attacks it.

The Arzinian Avatar will choose the combat style the player is weakest against; if the player uses melee, the avatar will use magic attacks once it manifests. However, this is not guaranteed as there is an element of randomness programed into the encounter.[1]

When speaking to him in the centre of the mine, he will indicate which style he will use. For example, if the player is wearing magic equipment, it will state Your magic abilities are impressive, but my powers of archery will foil them! which indicates he will manifest as a ranger. This is simple to overcome by using the appropriate Protection Prayer or by bringing another set of armour best suited to the avatar's attacks.

Its name also changes along with his combat style:

Once its avatar is defeated, the being's spirit is banished back to Bordanzan, where it will take over a thousand years to attain enough power to manifest itself on Gielinor again. 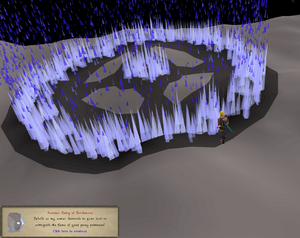 According to the Dwarven lore book, The Arzinian Being once terrorised the mines near Keldagrim. The Elders of Keldagrim decided to harness the power of gold ore to fight the Arzinian being and drive it out of the mines. After three days and three nights, the Arzinian Being was finally cornered inside a small tunnel, and with the power of the gold ore, the dwarves attempted to banish the demon back to Bordanzan.

The combined power of so much gold overpowered the Arzinian Being, causing it to collapse into itself. It then "tapped into its Bordanzian essence", and caused all the nearby stone and debris to form a single rock around it, trapping itself in an impenetrable rock of gold.