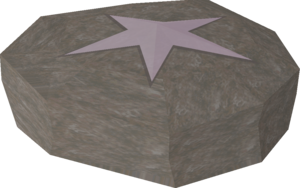 The Astral Altar may be found to the south-east of the village on Lunar Isle. It is used to craft astral runes from pure essence starting at level 40 Runecraft, providing 8.7 Runecraft experience per essence used. It can also be used to pray at and change to the Lunar spellbook from any other spellbook or back to the normal spellbook.

Unlike most altars, the Astral Altar does not need to be entered. As such, a talisman or tiara is not needed, nor can the players access the altar from the Abyss. However, the Lunar Diplomacy quest must be completed in order to use the altar. Players should take caution for the suqah that are en route to the altar.

Players should also be mindful to wear a Seal of passage when making multiple trips to avoid getting kicked off the island, assuming they haven't completed the elite Fremmenik Diary.