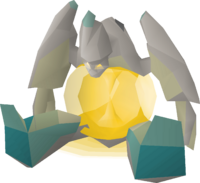 A rift through time, the Rewards Guardian grants the diary of Atlax to the player after safeguarding it through the ages.

Atlax was a Saradominist wizard who lived some time during the Third Age, when they were one of the workers tasked to restore the remnants of the Temple of the Eye, which had been left in ruins in the aftermath of the invasion of the Fallen Empire, whose assault had inadvertently opened an abyssal rift leading to The Scar. Atlax kept a diary of the time they spent rebuilding the temple, which spans a little over a week from the 15th till the 23rd of Bennath.

In this diary, Atlax describes working under the supervision of Pharana, who had been sent by Aliya, the Justiciar of the Lion, to oversee the work of clearing the site.[1] It would seem however that Aliya had not been fully transparent as to the original purpose of the temple, nor disclosed to Atlax or the other workers why these emergency repairs had to be executed with such haste. When Atlax describes turning over a cache of amulets they had found bearing the symbol of the Eye of Saradomin to Pharana, she reportedly mutters that the Justiciar has some explaining to do, indicating that she had figured out where they had been sent: the sanctuary built to house the Stone of Jas.[2] Unlike their supervisor however, Atlax remains in the dark about the identity of their worksite.[3] As Aliya had originally been instructed to keep all matters relating to the Eye a secret when charged by Zachariah, Justiciar of the Owl, to build the temple, it is likely that Aliya kept to this secrecy even after it had been discovered by the forces of the fallen empire.[4]

It is probable that Atlax was a wizard of some description, or at least possessed some magical ability, as they record having imbued their diary with a spell in order to keep it dry, as the bubble they reside in still lets through some seawater, possibly due to being damaged during the battle.[5] As the Justiciar of the Lion is known to have led an order of wizards – that being bestowed upon the most powerful among them – it is possible that Atlax was a member of that order.[6] Given that the Justiciar of the Lion resided in a college based somewhere in the Hallowvale, and built the temple somewhere beneath its southern sea, it is possible that Aliya mobilised her order out of urgency, as the most rapid labourforce available to her.[7][8]

One notable event recorded by Atlax in their diary is the discovery of an animated stone guardian among the rubble of the sanctuary, which they baptise as “Egg”.[9] Atlax keeps the existence of Egg secret from Pharana for a few days, during which the guardian gradually divulges information about its nature, prompted by Atlax's inquiries.[10] There exists some uncertainty as to the exact nature of the animated statue found by Atlax: it states to protect the rift at the behest of the Justiciar, and knows about the Scar and the danger it still poses. This would imply Egg to be a runic guardian akin to those featured in the Guardians of the Rift minigame; at the same time, it is described as enclosing “some sort of swirling, green core” at the centre of its body, reminiscent more of the rift guardians one can obtain as a pet while training Runecrafting.[11] As the runic guardians of the rift were created by Aliya only after the battle had taken place, in order to protect the temple in case the Scar were ever reopened, it is unclear how it would have ended up beneath the rubble the battle had left in its wake.[12] As Egg also describes having been “trapped” during the battle, leading to their energy being “bound to the stone”, it is perhaps more likely that Egg was originally a guardian that had been created at an earlier stage, to assist the Saradominists in their runic production efforts, with help of the Eye.[13][14]

When Atlax writes down their intention of revealing Egg’s existence to Pharana, the diary also ends, stating that “[t]his may be my last entry for a while”.[15] The fate of Atlax beyond this point is unknown, nor is there an explanation at hand for how their diary ended up in the “folded-space storage rift” inside of the Rewards Guardian.[16]