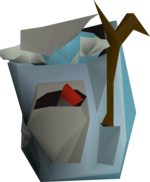 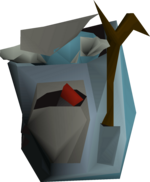 Ava's assembler is the upgraded version of Ava's accumulator that requires level 70 Ranged to equip. It provides the best in slot ranged attack bonus for the cape slot, and is the only cape slot item that provides a Ranged Strength bonus. Like all of Ava's devices, the assembler does not work when metal torso armour is worn, as this will cause 'interference'; this includes most melee armour as well as Ahrim's robes.

To obtain the assembler, players must take Ava's accumulator (or 4,999 coins), Vorkath's head (which can only be obtained by killing Vorkath after completion of Dragon Slayer II) and 75 mithril arrows to Ava in Draynor Manor.

Similar to its predecessors, it can randomly gather mithril ranged equipment. It also has an 80% chance of saving ammunition compared to the accumulator's 72%. As the remaining 20% chance is for the ammunition breaking, the assembler will never drop any ammo on the ground.

The breakdown of the ammo recovery rate is as listed:

The ammo retention of the assembler results in each ammunition being fired roughly 5 times before it is destroyed. This means it is approximately five times cheaper than the price paid. Comparatively, Ava's Accumulator's 72% ammo retention rate, fires ammo 3.57 times per ammunition, assuming it is not picked up from the ground, though picking it up would make it match the assembler's rate.

is the probability that a single arrow lasts exactly

the probability that a single arrow lasts at most

Which means the mean number of shots you get from one arrow is,

times as efficient as Ava's Accumulator when not picking up arrows.