Aviansies are found inside the Armadyl section of God Wars Dungeon, which is at the south-west part of the dungeon and requires 70 Ranged to enter. Alternatively, they can also be found in the Wilderness God Wars Dungeon, making these more dangerous to reach due to the threat of player killers, but they drop noted adamantite bars without the need to do a hard Achievement Diary. Nevertheless, both obstacles of entry in both dungeons require 60 Strength or 60 Agility to navigate.

Note: Players visiting the dungeon on their first trip will need a rope, and a mithril grapple to gain access to the eyrie. 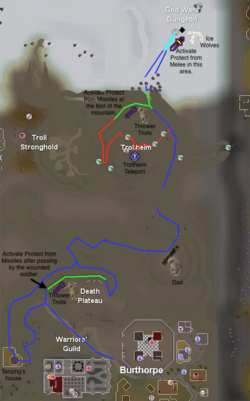 The blue route denotes coming from Burthorpe. The red route is taken from the Trollheim Teleport. Green indicates the use of Protect from Missiles, and cyan is where Protect from Melee should be activated.

Warning: Beware of player killers! Players must wear some Armadyl, Saradomin and Zamorak-related item, or else everything in the facility will become aggressive. It is strongly advised to stay away from the eastern portion of the dungeon and not use the 60 Agility shortcut unless a Bandos item is worn. 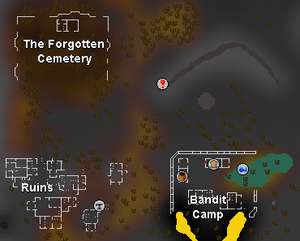 This method is only recommended for killing Aviansies in the regular God Wars Dungeon. Players should equip themselves with best-in-slot ranged gear, and wear Armadyl-affiliated clothing, as well as a Zamorak-related item, or else everything in the facility will be aggressive. A Saradomin item is worth wearing as well since players have to get past some Saradomin creatures. For better tanking, players could wear Verac's plateskirt and/or a good melee shield instead. Also, bones can be converted into peaches for additional food with either the Bones to Peaches spell itself or the tabs.

This method is only recommended for killing Aviansies in the regular God Wars Dungeon. Players should equip themselves with best-in-slot ranged gear. Notably, there are a large number of Aviansies (and no other Armadyl followers) directly outside of the entrance to Armadyl's Eyrie. An effective strategy is to wear a Zamorak-affiliated item, a Saradomin-affiliated item, and a Bandos-affiliated item. By not wearing an Armadyl item, players will only be attacked by the nearby Aviansies. By using Protect from Missiles, this allows players to use a more AFK strategy. Moreover, even for Ironmen, players need only deal 1 damage to any NPC killed in combat with another to receive the loot and credit for the kill. Note that the Aviansies are somewhat distant from one another and will not attack the player if already in combat with another god's follower. As such, it is less AFK than some other slayer assignments. This strategy works best by attacking five or six aviansies at a time and checking back periodically to pick up loot and attack any of the aviansies that have not noticed you.

This method is strongly recommended for killing Aviansies in the Wilderness God Wars Dungeon. As always in the Wilderness, players should keep risk to a minimal but wear god items to maintain tolerance in the facility. Players can utilise either the Prayer approach by activating Protect from Missiles and attacking an Aviansie or the tank method with monkfish or better.