From Old School RuneScape Wiki
Jump to navigation Jump to search
The RuneScape Wiki also has an article on: rsw:Aviansie (race)
This article is about the race. For the monster, see Aviansie. 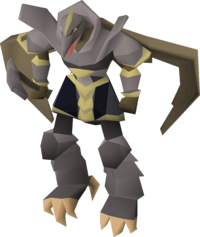 An image of an Aviansie.

An Aviansie (plural: Aviantese) is a humanoid avian creature of an endangered species that has worshipped Armadyl during the Second Age and Third Ages until Guthix woke from his slumber and ended the God Wars. Aviantese were tasked with guarding Armadyl's artefacts, such as the Staff of Armadyl, from enemy control and shared a deep bond with Armadyl. They were also the creators and protectors of the Godsword. However, even they could not stop the theft of the staff, the banishment of Zaros, and the rise of Zamorak. The Aviantese were believed to have become extinct during the God Wars, however, with the recent thawing of the previously frozen God Wars Dungeon have revived many God Wars combatants, including the Aviantese. Their destruction was one of the factors contributing to Armadyl's inactivity in Gielinor. 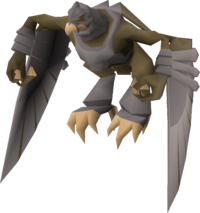 Kree'arra, one of the few remaining Aviantese and general of Armadyl.