Axe handles were items created through a random event that caused axe heads to fly off whilst Woodcutting. Heads and handles were either re-attached or deleted to prevent them from becoming discontinued items.

Dragon axes were included in this event. As they were worth over 2 million at the time, players who were not paying constant attention risked substantial losses. Curiously, although a special version of the Dragon axe handle was added in 2006, it was still possible to combine a Dragon axe head and a regular Axe handle.

Axe handles were removed in an update on 17 July 2007, prior to the release of Old School RuneScape, so they have never been obtainable. 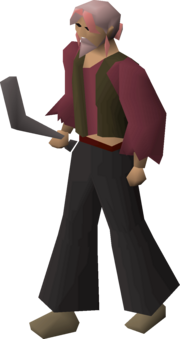