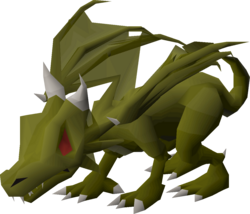 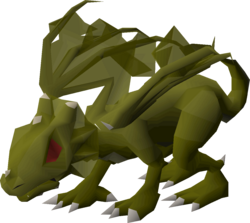 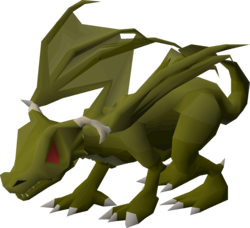 Baby green dragons are small green dragons that are found in Brimhaven Dungeon, east of the fire giants upstairs. There is also one spawn located in the basement of the Myths' Guild. There is an agility shortcut that allows direct access to them, requiring level 87 in Agility. Unlike their adult forms, they do not breathe fire.

Baby green dragons may be killed by players who have received green dragons as a slayer assignment but do not wish to kill adult green dragons in the Wilderness or their brutal counterparts in the Ancient Cavern. Killing a baby green dragon will not suffice for surpassing the Elite clue scroll, which tasks the player with killing a green dragon.

There is a safespot in the north-west corner of the plateau.

To reach baby green dragons, enter Brimhaven Dungeon (remember to bring 875 gold to enter and an axe to chop vines), go down the stairs west, and chop down the vines. Turn right and go immediately north and chop down the vines (requiring 34 Woodcutting to chop the vines). If you have at least 87 Agility, then run northwest until you reach a bright green vine, bringing you directly to baby green dragons. If you do not have 87 Agility, you may instead continue to run west into a room with a ring-shaped pond of lava. Go up the staircase in the north of this room. On the upper level, run south past the fire giants, then turn east at the first fork in this path to find the baby green dragon area. 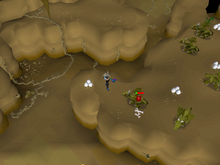