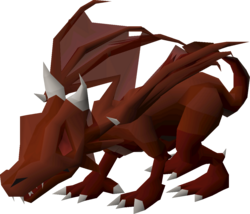 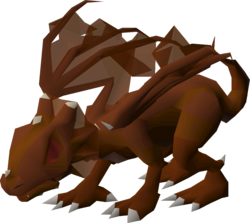 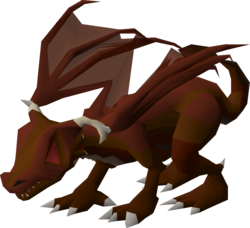 Baby red dragons are located in the Brimhaven Dungeon, Forthos Dungeon and in the basement of the Myths' Guild. They have the same combat level as the baby blue dragons that inhabit the Taverley Dungeon, although the baby red dragons in a player-owned house dungeon are level 65, not 48.

Players seeking baby dragon bones often choose to fight their blue counterparts as the possibility of red dragons or wild dogs attacking and the need for an axe and 875 coins to gain entry to the area deters many players. There are safespots for rangers and mages, but players may still be attacked by wild dogs. These monsters, like all dragons, are best attacked using stab or ranged attacks.