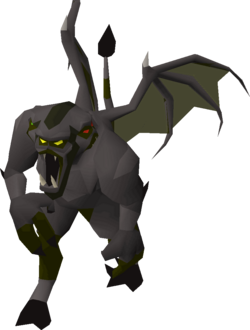 Balfrug Kreeyath is a three-faced black demon who destroyed the desert city of Ullek during the God Wars. He is one of K'ril Tsutsaroth's bodyguards, along with Zakl'n Gritch and Tstanon Karlak. He attacks with Magic by launching huge fireballs at the player and has a maximum hit of 16.

Balfrug Kreeyath is considered a black demon for the purpose of a Slayer task. As with most demons, he is susceptible to the effects of demonbane weapons.

Drop rates estimated based on 12,427 kills from the Drop Rate Project, unless otherwise cited.