From Old School RuneScape Wiki
Jump to navigation Jump to search
The RuneScape Wiki also has an article on: rsw:Banana plantation (Ape Atoll)

The banana plantation on Ape Atoll is an underground area involved in the final battle in the Monkey Madness I quest, and is only accessible during the quest. It consists of a square cave containing an enormous amount of banana trees with a large gorilla statue at its centre. Above the trees, encircling the top of the statue, is a large, square wooden platform on which the quest fight takes place.

After the fight is won, should players choose to stay in the area, it is possible to descend from the platform, down to where the banana trees are, via trapdoors at the four corners of the arena. A few small, poisonous spiders are found amongst the trees. It should be noted that the spiders' poison start at 3 hitpoints, and lasts a total of 13 poison hits. When poisoned, however, it is easy to quickly pick a couple of bananas to heal. 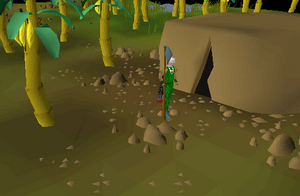 The crack at the base of the statue.

In the centre of the lower area is the base of the gorilla statue. Players can enter the base of the statue through a crack in it. Inside is Bonzara, an ancient monkey who hints at a possible sequel. He offers to teleport the player out of the arena at the end of the conversation. However, the teleport puts players in the jungle on Ape Atoll, where it may be possible to be poisoned.

Although this is much closer to Zooknock than Ardougne Zoo, the Greegrees do not work here.